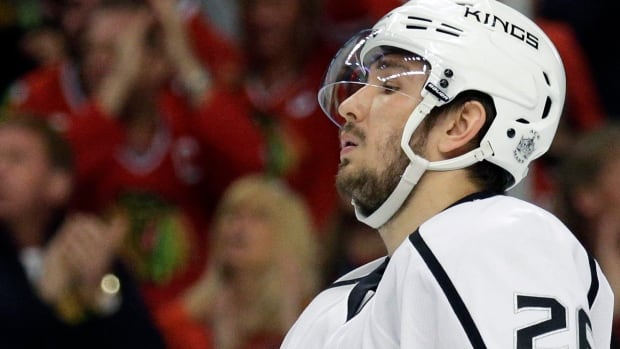 Suspended defenceman Slava Voynov has applied for reinstatement into the National Hockey League, four years after being suspended indefinitely in the wake of domestic violence charges.

Voynov, 28, played for St. Petersburg SKA of the KHL for the past three seasons. He also won a gold medal with Russia at the 2018 Winter Olympics but currently is not playing, while hoping for a return to the NHL.

He played for the Los Angeles Kings before his suspension, which took effect Oct. 21, 2014.

“Mr. Voynov has applied for consideration of reinstatement,” Bill Daly, the league’s deputy commissioner, said via NHL.com. “We’re in the process of what will be a fairly comprehensive investigation, a factual investigation into the events surrounding initially his arrest and his ultimate departure from North America.

The NHL recently suspended forward Austin Watson of the Nashville Predators for 27 games for a domestic incident. His suspension was reduced to 18 games on appeal.

In July, a Los Angeles County court dismissed a domestic violence conviction from 2015 against Voynov.

Voynov had pleaded no contest to a misdemeanor charge of corporal injury to a spouse following an altercation at his home in Redondo Beach, Calif., in October 2014. Police said Voynov punched, kicked and choked his wife.

Before deciding on the dismissal, the judge heard a doctor’s account that Voynov had completed 28 domestic violence counseling sessions. The counseling, Los Angeles County prosecutors argued, was not sufficient to satisfy the legal requirement after his plea.

Prosecutors objected to the conviction’s dismissal, saying it was “impossible to determine” whether Voynov completed the conditions required of his probation after his plea because he returned to Russia.

In 2015, the Kings terminated Voynov’s six-year, $25 million contract. The Kings retain his rights as he is technically under contract through the 2018-19 season.

“Any decision to reinstate Slava Voynov into the league is in the hands of the NHL. It is premature to comment prior to the NHL’s ruling,” the Kings wrote in a statement after the charges were dismissed.

The NHL confirmed that Voynov had a meeting with commissioner Gary Bettman this spring to begin outlining the process of re-entering the league, according to ESPN. The league was going to wait for this court decision as well as clarity on Voynov’s immigration status before moving forward.

In four seasons with the Kings, Voynov had 18 goals and 63 assists, with a plus-minus rating of plus-23.