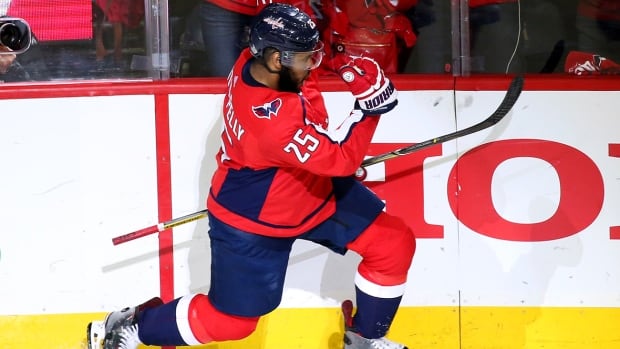 A salary-cap squeeze threatened to slam the Washington Capitals’ Stanley Cup window shut. Instead, it busted it wide open.

When the dollars didn’t add up to be able to keep a handful of key contributors to back-to-back Presidents’ Trophy-winning teams, the Capitals went bargain hunting to sign bought-out winger Devante Smith-Pelly, who general manager Brian MacLellan termed a “project.” Up against the cap at the trade deadline, they acquired lightly used defenseman Michal Kempny from Chicago.

“Some of the best acquisitions are ones that are under the radar, ones that fit almost seamlessly,” coach Barry Trotz said. “Some of the best deals that we’ve made are those ones that, even myself I’m like, `Hmm, that’s a little bit of an upgrade, not a big one.’ And they ended up being the biggest upgrades because they’re not sexy names.”

Kempny said “probably nobody knew my name when I came here or played in Chicago,” and Smith-Pelly had his name on the back of three other NHL teams’ jerseys before this season. Now they’re key pieces for a team one win from the Stanley Cup after the Capitals hit on exactly the kind of moves every championship contender is looking to make.

All it cost was a one-year deal at the league minimum to sign Smith-Pelly after he was bought out by the Devils, and a third-round pick to get Kempny from the Blackhawks. Alex Ovechkin, Evgeny Kuznetsov and Braden Holtby have led Washington to this point, up 3-1 on the Vegas Golden Knights with the chance to raise the Cup after Game 5 on Thursday night. But they wouldn’t be here without the contributions of Smith-Pelly and Kempny.

After a seven-goal regular season, Smith-Pelly has six goals in the playoffs, including potential series daggers in Games 3 and 4 of the final. This isn’t exactly where the 25-year-old thought he’d be just under a year ago when he found out a minute before the buyout deadline that the Devils were cutting him.

“You only get so many chances to stick,” said Smith-Pelly, a 2010 second-round pick who bounced from Anaheim to Montreal to New Jersey, never putting up more than 17 points in a season. “I knew that this could be my last one, so I kind of took the buyout personally and listened to what the coaching staff had to say and what they wanted, and just went out there and did it.”

Smith-Pelly wasn’t even guaranteed a roster spot when he signed. He developed into a teammate on and off the ice that helped propel the Capitals to another division title despite losing forwards Justin Williams, Marcus Johansson and Daniel Winnik, and defensemen Nate Schmidt, Karl Alzner and Kevin Shattenkirk last summer. He was the Capitals’ Masterton Trophy nominee for perseverance and dedication to hockey after taking an incident of racist “basketball, basketball, basketball” taunts and turning it into a positive when he facilitated money be donated to Fort Dupont Ice Arena in Washington.

“What happened was obviously pretty negative,” Smith-Pelly said. “But for the people of Chicago to feel that they needed to donate money and for me to give it to Fort Dupont I thought turned a pretty bad thing into something that could change many kids’ lives in that area.”

Smith-Pelly always seems to find the positive. He brushed off a puck to the face at the morning skate Monday and scored a back-breaking goal that night.

Kempny has done the same. Stepping on a puck during pregame warmups led to a spill and stitches across the bridge of his nose, but the 27-year-old missed no time. He then pumped in a Game 4 goal that helped put the Capitals on the verge of winning the Cup.

It’s the latest impact Kempny has made on his new team after fitting in as a top-four defenceman alongside John Carlson.

“He played big minutes against top players, be it the [Evgeni] Malkins and the [Sidney] Crosbys, and he’s done a really good job,” Trotz said.” He’s just one of those players that is effective — efficient, effective, gets it done. You’re not going to see a lot of offence. He’s got some great looks, though. You talk about a guy who’s developing maybe from more of a stay-at-home type of defenceman to a guy who recognizes opportunity.”

This is the opportunity Kempny had been waiting for after being a third-pairing defenceman with the Blackhawks, and sometimes a healthy scratch. Coach Joel Quenneville wasn’t a fan, so the Capitals made a deal arguably more meaningful than Evander Kane to San Jose, Paul Stastny to Winnipeg, or Ryan McDonagh and J.T. Miller to Tampa Bay.

The Capitals have shown they can play against and beat anyone, with Smith-Pelly and Kempny proving to be perfect pieces for a team eyeing a championship.

“Everything’s worked out very well,” Smith-Pelly said. “If we end up winning, that would be the cherry on top.”