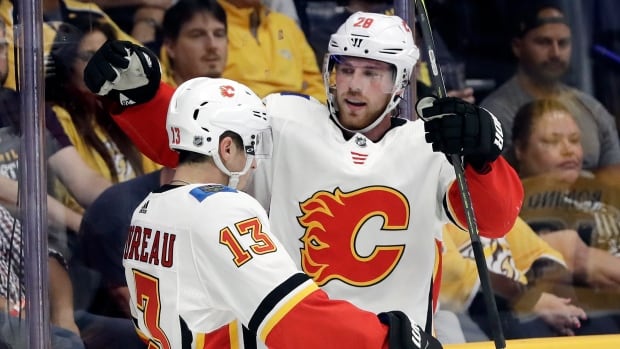 Mike Smith made 43 saves and Sean Monahan scored twice to lead the Calgary Flames to a 3-0 victory over the Nashville Predators on Tuesday night.

Elias Lindholm scored and Johnny Gaudreau had three assists for Calgary, winners of two of three.

Smith was stellar, especially in the second period when he turned aside 21 shots. Nashville had a two-man advantage for a full 2 minutes in the period. Smith’s best save came with 12:29 remaining in the second, when he gloved Ryan Hartman’s wrist shot from the left side at the conclusion of a 2-on-1 rush.

The loss was Nashville’s first after a pair of road wins to open the season.

Lindholm scored the game’s first goal with just under four minutes remaining in the opening period.

With Calgary on a power play, Gaudreau carried the puck through the slot and found Lindholm on the right side, where he beat Nashville goaltender Pekka Rinne with a wrist shot on the glove side for his third goal of the season.

The Flames doubled their lead at 5:22 of the second on a power-play goal from Monahan.

Rinne kicked aside Matthew Tkachuk’s shot from the high slot, but the rebound landed right on the tape of Monahan’s stick on the left side, where he had an easy tap-in.

Early in the third, Monahan carried the puck into the Nashville zone on the left side on a 2-on-1 with Mattias Ekholm defending. With Ekholm splayed on the ice, Monahan’s shot hit the Swedish defenceman’s left skate and slid between Rinne’s pads.