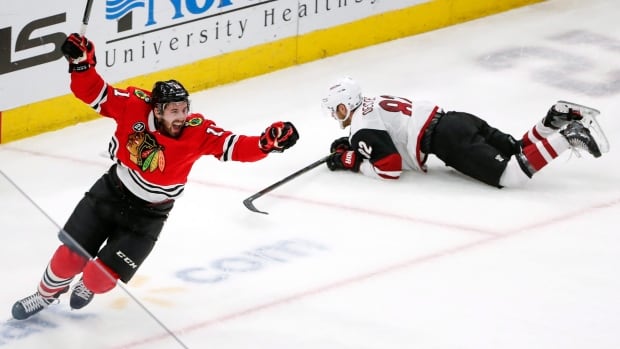 “Finally, somebody wants to talk soccer with me,” he said after a late-season morning skate in Toronto.

Perlini spends a lot of his free time following footy. He is a loyal supporter of Manchester United and England. He always has a moment or two to talk about soccer. His passion runs deep for the beautiful game.

A few months ago, he attended a Chicago Fire MLS game and met former Manchester United midfielder Bastian Schweinsteiger, who now plays for the Fire.

Last summer, he was in heaven. Manchester United played a friendly game in Glendale, Arizona.

Perlini was a member of the Arizona Coyotes at the time (he was traded to the Blackhawks last fall). Man U invited Perlini down to the pitch. He met some of the players, and he was interviewed on the pre-game show on Manchester United television.

“It was an unbelievable experience,” the 23-year-old Perlini recalled. “I like talking with other athletes to see how they tick.”

Before he was traded along with Dylan Strome to the Blackhawks in exchange for Nick Schmaltz on Nov. 25, Perlini closely followed the local Phoenix Rising. Led by Diddier Drogba, the Rising advanced to the United Soccer League final, only to lose 1-0 to Louisville City.

He enjoyed a few conversations with Drogba, who made his name in the Premier League with Chelsea and has since retired. Perlini also talked with former England international Shaun Wright-Phillips, who also spent time with the Rising.
Perlini’s passion for soccer comes honestly. He was born and raised in Guildford on the outskirts London, England, where his father Fred played professional hockey with the Guildford Flames.

“Soccer is like hockey over here,” said Perlini, who would spend summers in Sault Ste. Marie, Ont. “I played a little over there with my friends and when we moved back to Canada [when he was 12].

“Around London, there are about eight to 10 teams in the Premier League. Tottenham, Chelsea, Arsenal, West Ham, you can go through the list.

“At school, all my buddies supported one of the London teams. I always have to be different. I really liked [Man U striker] Ryan Giggs. He wore No. 11. My brother and I always wore No. 11. That was my dad’s number.”

Wearing No. 11, Fred, a 1980 eighth-round selection of the Toronto Maple Leafs, scored a whopping 90 goals in 50 games in his penultimate season in Guildford.

Wearing No. 11, Brendan’s older brother Brett played and scored a goal for Great Britain at the 2019 IIHF world championship.

Wearing No. 11, the younger Perlini played for Canada’s side at the 2016 IIHF world junior tournament.
His next game will be his 200th career NHL game. He’s hoping to build off his finish to last season when he scored 12 goals in 46 games for the Blackhawks after checking in with only two goals in 22 games in Arizona before the trade.
Perlini, a restricted free agent, has yet to work out a new contract with the Blackhawks. But both sides appear confident a deal will be signed before training camp begins next month.

In the meantime, the 6-foot-3, 200-pound Perlini hopes to help push the Blackhawks back into the playoffs, and he hopes for better times for his beloved Manchester United. They had a difficult season at Old Trafford last year, finishing sixth and failed to win any of their final five games in the Premier League.

The Premier League gets underway this weekend, and you can bet Perlini will be watching.