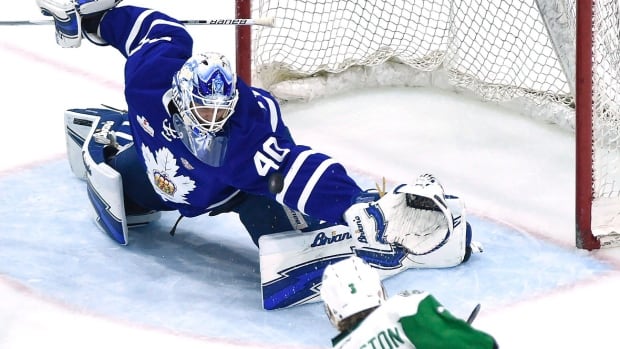 Garret Sparks has won the backup goalie job with the Toronto Maple Leafs.

Sparks was named to the club’s 23-man roster on Monday, while fellow netminders Curtis McElhinney and Calvin Pickard were placed on waivers.

The decision to keep last season’s American Hockey League goalie of the year as the No. 2 behind Frederik Andersen doesn’t come as a surprise.

At 25, Sparks appeared to be a much more likely candidate to be plucked from the waiver wire than the 35-year-old McElhinney or the 26-year-old Pickard.

Connor Carrick, a 24-year-old defenceman, was also placed on waivers Monday as Toronto made its final cuts.

The Leafs will start the regular season with two goalies, eight defencemen and 13 forwards.

Carrick was beat out for a job by Travis Dermott, Justin Holl, Martin Marincin and former KHLer Igor Ozhiganov at the bottom end of a blue-line group led by Morgan Rielly, Jake Gardiner, Ron Hainsey and Nikita Zaitsev.

If McElhinney, Pickard and Carrick aren’t claimed on waivers they will be assigned to the Toronto Marlies of the AHL.

The Leafs open their schedule Wednesday night at home against the Montreal Canadiens.