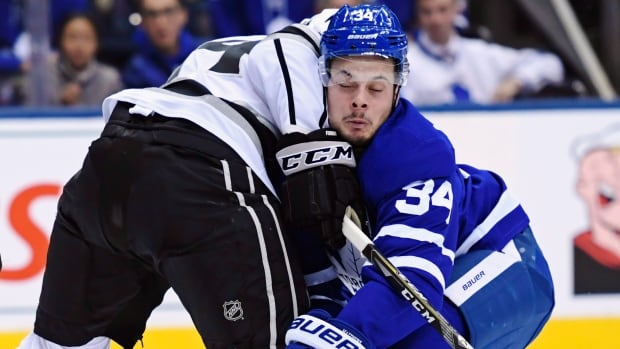 Garret Sparks made 33 saves in a surprise start and Kasperi Kapanen scored twice as the Toronto Maple Leafs stretched their winning streak to five games with a 4-1 victory over the Los Angeles Kings on Monday night.

Patrick Marleau and Mitch Marner had the other goals for Toronto (6-1-0), while Auston Matthews and Jake Gardiner each added two assists.

Leafs head coach Mike Babcock named Sparks as his starter ahead of No. 1 goalie Frederik Andersen after the morning skate, which seemed like a peculiar decision at the time because Toronto had a day off on Sunday.

Toronto then announced about 2 1/2 hours before puck drop that Andersen has a lower-body injury and is listed as day-to-day, with Eamon McAdam getting recalled from the Newfoundland Growlers of the third-tier ECHL on an emergency basis.

McAdam got the promotion after the Leafs lost both Curtis McElhinney and Calvin Pickard to the waiver wire right before the season, while Kasimir Kaskisuo of the AHL’s Toronto Marlies was injured over the weekend. Jeff Glass, Kaskisuo’s backup with the Marlies, is on an AHL-only contract.

Fresh off a perfect 4-0-0 road trip where they outscored their opponents 23-15, including a 4-2 victory over the defending Stanley Cup champion Washington Capitals on Saturday, the Leafs got on the board just 46 seconds in against the Kings when Kapanen banked a shot off Campbell from behind the net for his third goal of the season.

The play started with Matthews fighting off Kings defenceman Drew Doughty before finding Gardiner at the point.

Matthews, who had Kapanen moved to his line in a wild 7-6 overtime victory against the Chicago Blackhawks to open Toronto’s recent road trip, has at least two points in every game so far this season and leads the NHL with 16 total (10 goals, six assists).

Kapanen, meanwhile, has all eight of his points (four goals, four assists) since moving into Toronto’s top-6 alongside Matthews and Marleau in a spot originally pegged for William Nylander, who remains in Sweden as his contract impasse drags on.

On the heels of Saturday’s 5-1 road loss to the Ottawa Senators, the Kings nearly tied it moments later, but Tyler Toffoli’s shot pinged off the post and stayed out.

The Leafs made it 2-0 with 20.5 seconds left in the first on their second power play of the period when Marleau was given far too much time and space at the side of Campbell’s net before sliding his first in off Doughty.

The Kings cut the deficit in half at 3:38 of the second when Matthews mishandled a puck in front his own net before Alex Iafallo fed Kovalchuk, who beat Sparks between the pads for his second.

The goal for the 35-year-old Kovalchuk, who spent the last five seasons playing at home in Russia’s KHL, was his first against Toronto since Dec. 6, 2011, when he was a member of the New Jersey Devils.

But the Leafs got that one back at 8:28 on a sequence that compounded Doughty’s miserable night. Zach Hyman stepped around the blue liner before absorbing an attempted sandwich hit by Doughty and Dion Phaneuf, leaving the puck for John Tavares to find a wide-open Marner at the side of the net to tap in his third goal and 11th point.

Tavares also now has 11 points, while Leafs defenceman Morgan Rielly, who was held off the scoresheet Monday, has 13.

Sparks, who gave up six goals in that wild overtime victory against Chicago in his only other start of 2018-19, made a nice blocker stop on Toffoli right before the Marner goal. He then stopped Jeff Carter on the second of two Kings’ power plays — a beleaguered man-advantage unit that has failed to score on all 21 of its opportunities so far this season.

Toronto put things to bed at 7:45 of the third when Matthews fed Kapanen on a 2-on-1 rush and he beat Campbell, who made his fifth straight start in place of the injured Jonathan Quick, on a backhand upstairs for his fourth.