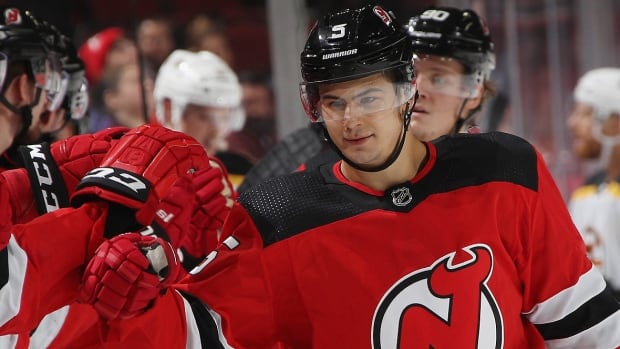 New Jersey Devils defenceman Connor Carrick, who has focused on personal growth with the NHL on pause during the COVID-19 pandemic, weighed in following a Saturday night of destruction across the United States by those protesting the death of George Floyd.

The sixth-year NHLer recently began the Connor Carrick Podcast aimed at improving his physical, mental and spiritual well-being, but on Sunday morning took to social media to voice his frustration. Six days earlier, Floyd, a 46-year-old unarmed and handcuffed black man, died in Minnesota when police officer Derek Chauvin used his knee on Floyd’s neck to pin him to the ground.

Chauvin has since been fired and charged with third-degree murder and second-degree manslaughter while there have been many incidents across the U.S. of people throwing bottles at officers, setting buildings ablaze, burning police cars and looting stores in protest.

“I will not bear witness further to the degradation of human life. People are dying,” the 26-year-old Carrick of Orland Park, Ill., wrote on Twitter. “Families are being robbed of their loved ones presence and gifts. Mr. Floyd had his life sucked out of him.”

He also called for individual change in order to foster change nationally.

‘The images are tough to stomach’

“We must celebrate, champion, lift those in life fighting a battle more difficult than our own,” said Carrick, a former Toronto Maple Leafs blue-liner who has appeared in 230 NHL regular-season games.

“I can make a difference. No matter how small, we all can. And I hope that we all will.”

Toronto FC defender Justin Morrow, 32, grew up in Cleveland the son of an African-American police officer.

On Sunday morning, he shared on Twitter that he’s “never felt racial tension as much as I do today.”

“The images I’m seeing across America are tough to stomach but I can only hope we’re finally standing on the precipice of change.”

Earlier Saturday, the statue of hockey legend Mario Lemieux was spray painted by protestors outside PPG Place Arena in Pittsburgh.

It’s just a statue. <br>But what Mario Lemieux signifies to Pittsburgh is immense. And not just the hockey part.<br>What Mr. and Mrs. Lemieux have done for charity causes in our town, especially those with cancer, doesn’t have a match.<br>This is disgusting and appalling. <a href=”https://t.co/0NrBOyvJUU”>pic.twitter.com/0NrBOyvJUU</a>

Lemieux, who played a part in five Stanley Cup titles with the Penguins, including twice as a player, saved hockey in Pittsburgh by buying a bankrupt franchise.

“I’m very disappointed because this was a peaceful protest for something that was very serious, and this does nothing to honour the memory of someone who died,” Pittsburgh police Chief Scott Schubert told the Post-Gazette newspaper in reference to vandalism and graffiti.