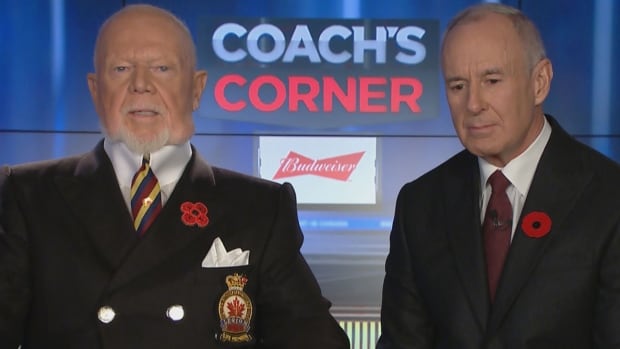 Sportsnet, as well as Hockey Night in Canada host Ron MacLean, both apologized Sunday after commentator Don Cherry complained on national television on Saturday that he rarely sees people he believes are immigrants wearing poppies ahead of Remembrance Day.

Yabsley says the network has spoken to Cherry about the severity of his comments.

The 85-year-old Hockey Night in Canada personality made the remarks during his weekly Coach’s Corner segment, singled out new immigrants in Toronto and Mississauga, Ont., where he lives, for not honouring Canada’s veterans and dead soldiers.

Don Cherry sparked online backlash on Saturday night for his comments about immigrants not wanting to wear poppies ahead of Remembrance Day. 0:50

“Don Cherry made remarks which were hurtful, discriminatory and flat-out wrong…. I sincerely apologize and I wanted to thank you [the audience] for calling me and Don out on that last night.”

I have worked with Don for 30 years, and we both love hockey. But last night, I know we failed you. I see hockey as part of what unites us. I have the honour of travelling across our country to celebrate Canada’s game, and our diversity is one of our country’s greatest strengths.

Cherry’s comments prompted a swift online backlash on Saturday night, with many calling for his firing.

The NHL weighed in a day later.

Cherry did not respond to multiple phone calls seeking comment.

Hockey Night in Canada used to be a long-time CBC Saturday night staple. The show and its games moved to Sportsnet when Rogers landed a 12-year, $5.2 billion US national broadcast rights deal with the NHL that began in 2014.

The show is still broadcast on CBC in a sub-licencing deal with Rogers Media, which owns Sportsnet. But the show is run by Sportsnet and filmed in its studio in the CBC building in Toronto.

“As Rogers Media is the national rights holder for NHL Hockey in Canada, CBC has no purview over any editorial [choice of commentators or what they say] with respect to Hockey Night in Canada,” CBC spokesperson Chuck Thompson said in an email.

‘There is no “you people,”‘ NDP Leader says

Among the online responses was from federal NDP Leader Jagmeet Singh.

“There is no ‘you people,'” Singh tweeted after posting a photograph of his great-grandfather, who he said served under the British in both the First and Second World Wars. “We’re all as Canadian as the next. We honour all who served.”

For <a href=”https://twitter.com/CoachsCornerDC?ref_src=twsrc%5Etfw”>@CoachsCornerDC</a> to say that “you people” do not respect 🇨🇦 or our veterans is despicable. We’re proud of diverse cultural heritage and we‘ll always stand up for it. New immigrants enrich our country for the better. We’re all Canadians and wear our poppies proudly.

Toronto Mayor John Tory implored Cherry to come to Old City Hall on Remembrance Day to “see thousands of Canadians of all ages, nationalities, faiths and backgrounds” who honour veterans.

Don Cherry is way off base to question the devotion of newer Canadians to the very same veterans and the sacrifices we will honour tomorrow on Remembrance Day. His comments are unfair and just plain wrong.

“Cherry’s remarks were ignorant and prejudiced, and at this point in our history can’t go without comment.”

Cherry made his comment prior to running his annual Remembrance Day video montage, where he is seen walking through a military cemetery in France visiting the graves of Canadian soldiers who went to battle in the First World War.

Poppies are sold every year starting on the last Friday in October until Remembrance Day on Nov. 11 by The Royal Canadian Legion to raise money in support of veterans and their families.

Another response to Cherry’s comments came from Paula Simons, an independent senator from Alberta.

She wrote that it has not been her experience that new immigrants don’t wear poppies or appreciate the tragedies of war, and further condemned the sentiment behind Cherry’s remarks.

“We don’t honour the sacrifice of those who died in battle by sowing division or distrust,” Simons wrote.

Rumours circulated about the possibility of Cherry being cut from Coach’s Corner earlier this year after a Toronto Sun columnist wrote that his return to the show had not been confirmed by the summer.

Cherry said at the time that he was not retiring from the decades-old show yet.