Funny how the sporting world works out sometimes.

Forty years ago, George McPhee and his childhood friend Brian MacLellan celebrated a national junior A championship together when their Guelph Holody Platers swept the Prince Albert Raiders to win the Centennial Cup. Both players were named to the series all-star team.

McPhee and MacLellan went on to play together at Bowling Green University, where they won the 1981-82 MacNaughton Cup as the regular-season champions of their conference, and later spent a season as teammates with the 1985-86 New York Rangers.

After their playing careers ended, they worked together in management with the Washington Capitals, with McPhee as general manager and MacLellan as his assistant GM.

Now, at age 59, the old friends are foes. McPhee is the GM in Vegas, where he has steered the expansion Golden Knights on a remarkable run that has them in the Stanley Cup Final against MacLellan — now the GM in Washington — and the Capitals.

“It’s just another chapter in this crazy book that is our season,” McPhee said. “We’ve texted a little bit. We talked [on Saturday]. Last time I saw him before that was at the [NHL] GMs meeting. We had dinner. It’s sort of gone this way, and hard to believe, but we’ll enjoy it.

“It beats the jobs we had when we were kids and we’ll see where this goes.”

McPhee spent 17 seasons as the Capitals’ GM. He was at the helm 20 years ago when Washington made its first trip to the Stanley Cup final, only to be swept by the Detroit Red Wings.

MacLellan was working in the financial world when, in 2000, McPhee convinced his friend to take on a pro scouting role with the Capitals. MacLellan worked his way through the ranks, became assistant GM and replaced McPhee when he was fired three seasons ago.

“It’s kind of a weird experience,” said MacLellan, who won a Stanley Cup as a player with the 1988-89 Calgary Flames. “We kind of have been texting back and forth about how strange it feels to have this line up the way it has. It’s a little awkward, but it’s going to be a fun experience. I hope.” 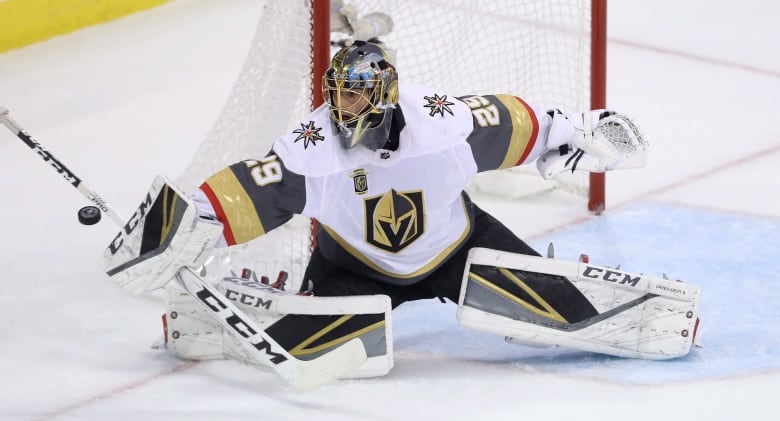 Marc-Andre Fleury has been instrumental to Vegas’s improbable run, posting a stellar .947 save percentage and league-leading four shutouts in this year’s playoffs. (Trevor Hagan/Canadian Press)

McPhee is responsible for 13 players on the current Capitals roster and has two of his Washington draft picks — Cody Eakin and Nate Schmidt — playing for the Golden Knights.

Nobody predicted the Golden Knights and Capitals would be playing for the Cup when the curtain was raised on the regular season eight months ago. Vegas has written a story for the ages with its remarkable run as an expansion team. Meanwhile, the championship window had seemed to be closing for the Capitals until Alex Ovechkin and his teammates found their groove.

The Golden Knights have needed only 15 games to advance through three playoff rounds, going 12-3, while Washington has won eight of its 10 road games in this post-season — two road wins from matching the playoff record.

This series also marks the sixth time in NHL history that two franchises that have not won a Stanley Cup meet in the final, and the first time since the 2007 final between the Anaheim Ducks and Ottawa Senators.

The Golden Knights won both regular-season games against the Capitals — 3-0 on Dec. 23 in Vegas (Marc-Andre Fleury had a 26-save shutout) and 4-3 on Feb. 4 in Washington (Reilly Smith scored twice for the Golden Knights).

Here are five storylines to follow as the teams face off for the Stanley Cup:

Ovechkin on a mission

After 13 seasons, 1,119 combined regular-season and playoff games and 665 combined goals, a 32-year-old Alex Ovechkin has finally made it to the final.

Ovechkin has played like a man on a mission in this post-season with 12 goals in 19 games.

He is trying to become the first Russian captain to win a Stanley Cup and only the third player to win his first Cup after scoring 600 regular-regular goals. Luc Robitaille and Dave Andreychuk were the first two, with the 2001-02 Detroit Red Wings and 2003-04 Tampa Bay Lightning, respectively.

Golden Knights goalie Marc-Andre Fleury and his Capitals counterpart, Braden Holtby, have played massive roles in helping their teams advance to the final.

The 33-year-old Fleury, who has three Stanley Cup rings from his time with the Pittsburgh Penguins, has an outstanding .947 save percentage and league-leading four shutouts in this year’s playoffs. His next win will be his 75th career playoff victory to push him into seventh place on the all-time list.

The 28-year-old Holtby enters the final riding back-to-back shutouts and a scoreless streak of 157 minutes and 13 seconds, not including the 2:14 he was on the bench for an extra skater at the end of Game 5 of the East final against the Lightning. 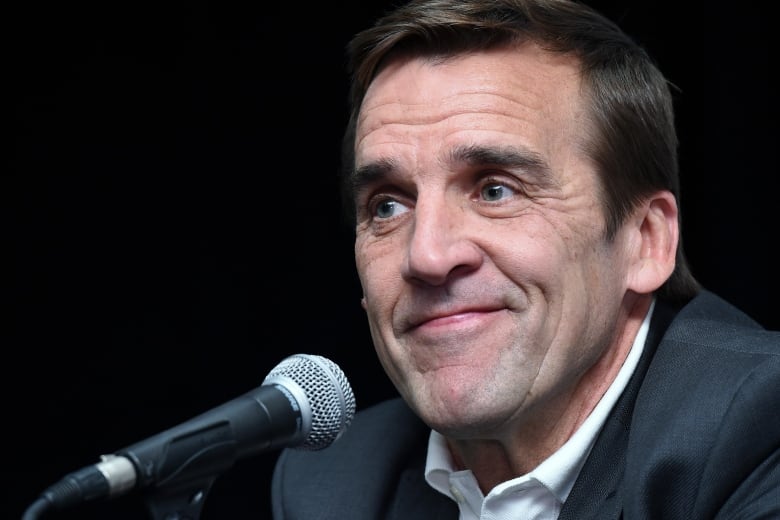 Former Caps GM George McPhee has done the unthinkable by getting his expansion Vegas team within four victories of winning the Stanley Cup. (Ethan Miller/Getty Images)

Golden Knights defenceman Nate Schmidt was the player the Capitals lost in the expansion draft.

After the Capitals acquired defenceman Kevin Shattenkirk from the St. Louis Blues at the 2017 trade deadline, Schmidt was scratched for 14 of the final 21 regular-season games and only saw action in the playoffs after Karl Alzner was injured.

With the Golden Knights, Schmidt is on the shutdown pairing alongside Brayden McNabb and has averaged a team-leading 24:53 of ice time a game.

Career coaches get their shot

Capitals head coach Barry Trotz doesn’t have a contract for next season. His Golden Knights counterpart, Gerard Gallant, was unemployed until he was hired 13 months ago as Vegas’s first head coach.

While this is the first trip to the final for both head coaches, both have been successful at other levels. Trotz guided the Capitals farm club in Portland to the 1993-94 Calder Cup. Gallant steered the 2010-11 Saint John Sea Dogs to a Memorial Cup championship.

Who was the last head coach to win a Calder Cup-Stanley Cup double? John Tortorella accomplished the feat with the 1995-96 Rochester Americans and 2003-04 Lightning.

The last coach to win a Memorial Cup and then a Stanley Cup was Claude Julien with the 1996-97 Hull Olympiques and 2010-11 Boston Bruins.

Vegas in six. This story is too good not to conclude with four of a kind.