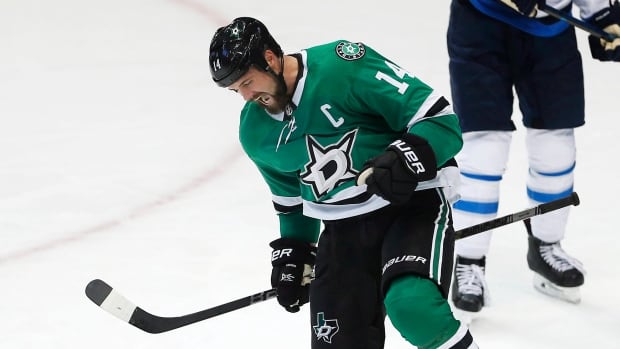 Jamie Benn had two power-play goals, Tyler Seguin scored another and had a goal at even strength, and the Dallas Stars beat the Winnipeg Jets 5-1 on Saturday night.

Dallas dominated the first period with a 16-9 advantage in shots and two goals less than three minutes apart by Alexander Radulov and Seguin, the latter on the power play.

Benn scored power-play goals in the second and third periods, and Seguin scored in the third.

The Stars’ top line accounted for all five goals and five assists. Seguin and Radulov each had two assists.

Ben Bishop finished with 32 saves for Dallas, 15 in the third period. Connor Hellebuyck had 30 for Winnipeg.

In the second period, the Jets’ Kyle Connor scored his second goal of the season and the first against Bishop after 82 minutes, 10 seconds.

The Stars scored their second power-play goal at 7:26 of the second period. Standing at the left of the net, Benn stopped the puck, moved it to his forehand and stuffed it into the left corner.

Benn’s second goal came at 7:38 of the third, just six seconds after Myers was called for high sticking. Benn redirected a pass from Seguin.

The first period ended with 14 minutes of penalties in the final second. At 19:59, the Stars’ Marc Methot went off for holding and Winnipeg’s Dustin Byfuglien retaliated by cross checking Methot. On the ensuing faceoff, Brett Ritchie of Dallas and the Jets’ Adam Lowry dropped their gloves and drew fighting majors at 20:00.