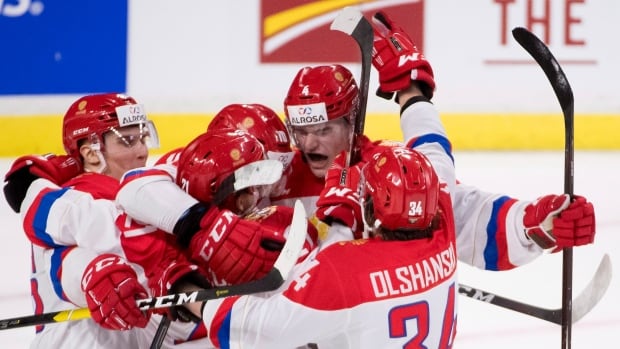 Stepan Starkov scored the go-ahead goal at 18:18 of the third period while on the power play as Russia downed Team WHL 3-1 on Tuesday at the Canada Russia Series.

Bulat Shafigullin scored late in the first for the Russian juniors while Ivan Muranov added an empty netter less than a minute after Starkov’s winner. Pyotr Kochetkov made 33 saves for the victory.

Ty Smith found the back of the net for the Western Hockey League squad. David Tendeck stopped 25-of-27 shots in a losing cause.

Team WHL downed Russia in the series opener on Monday 2-1 in Kamloops, B.C., with Jordy Bellerive and Dylan Cozens supplying the offence and Ian Scott making 27 saves for the win.

The Canada Russia Series started in 2003 and consists of six games against the Russian junior national team. Each of the three leagues making up the Canadian Hockey League — the WHL, Ontario Hockey League and Quebec Major Junior Hockey League — play Russia twice.

The series now shifts to Ontario for two games on Thursday and next Monday. The series wraps up with two games against the QMJHL on Nov. 13 and 15.

CHL teams have played to an overall record of 62-23-7, with the WHL’s record falling to 21-8-3 after splitting this year’s two-game set.