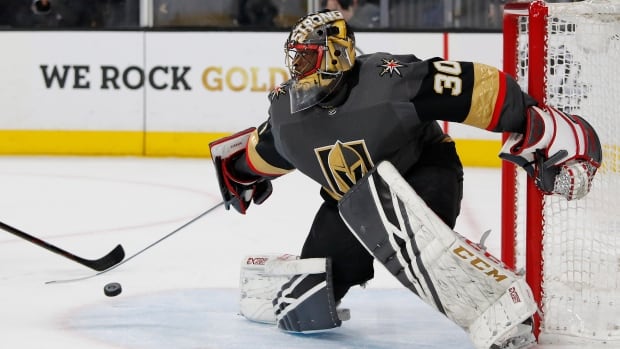 Tomas Nosek also scored for Vegas, which is 10-1 since losing to Winnipeg 6-3 in its final game before acquiring Mark Stone at the trade deadline. The Golden Knights are 10-1 since.

Subban, whose shutout came in his 35th career start, has won two straight and seven of his last nine starts. He’s also nearly unbeatable at T-Mobile Arena with a 13-1-0 record in two seasons.

Winnipeg dropped to 5-3-0 in the second game of back-to-backs this season.

Laurent Broissoit started in net for the Jets, but was pulled after allowing three goals. Connor Hellebuyck, who entered with 14 minutes left in the second period, allowed two goals and made 18 saves.

Vegas, which has the seventh-best penalty kill, stopped Winnipeg twice on the power play. The Jets came into the game with the league’s fourth-best unit. They had scored a power-play goal in five consecutive games and are now 14 for 48 with an extra man in their past 15 games.

Karlsson wasted no time in putting the Golden Knights on the board after gathering a rebound behind the goal line, circling back and ripping a backhand from a sharp angle past Broissoit. Later in the period, it was Smith with a highlight toe drag around a sliding defenseman and a top-shelf delivery over Brossoit’s shoulder to make it 2-0.

Nosek picked up his eighth goal of the season when he broke free alone for a short-handed snipe that chased Brossoit in favor of Hellebuyck.

Smith scored his second of the game and 17th of the season when he took a pass from Karlsson and lasered a wrist shot past Hellebuyck to make it 4-0. And just 24 seconds later, it was Karlsson with a solid move to the slot, between Winnipeg’s Joe Morrow and Patrik Laine, and beat Hellebuyck far side to extend Vegas’ lead to 5-0.

Smith has at least one point in 15 of his last 19 games, having scored eight goals and dishing out 15 assists.