Toronto defenceman Ron Hainsey, the 13th overall pick at the 2000 NHL draft by the Montreal Canadiens, played the 1,000th game of his career. The 37-year-old, who was joined at centre ice by his wife and their three children for a ceremony before the opening faceoff, spent nearly five full seasons in the minors before finally sticking with the Columbus Blue Jackets in 2005-06.

The Leafs, who have now failed to score in the first two periods of five straight home games and have lost four of their last six games overall, visit the Pittsburgh Penguins on Saturday.

Having grabbed their first road win of the season with Tuesday’s 4-1 decision over the Montreal Canadiens, the Stars snapped a scoreless tie at 11:55 of second period just as a Leafs’ penalty expired.

Seguin fired a shot from the top of the left face-off circle that Benn tipped past Andersen for his fifth goal of the season and first in eight games. 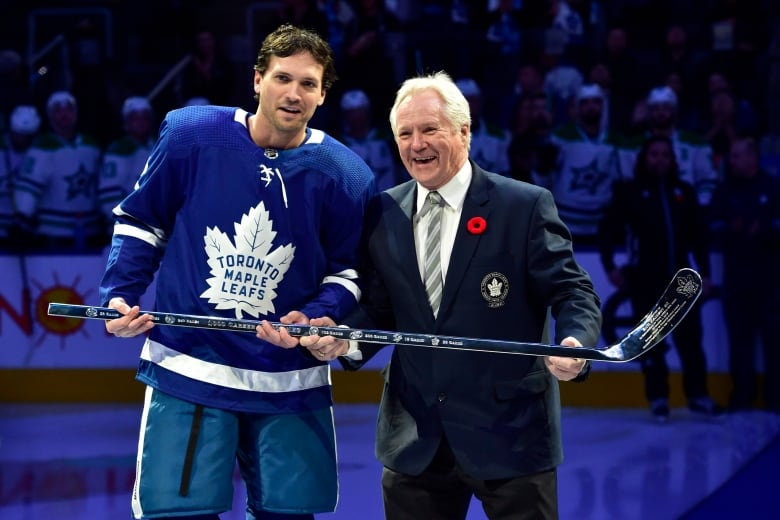 Toronto had the best chance on another Dallas power play later in the period when Khudobin gave the puck away to Mitch Marner, but the Stars goalie recovered to make an awkward stop.

The visitors came close to taking the lead six minutes into the second on a 2-on-1 rush, but Andersen was there to stop Jason Dickinson’s effort off a pass from Brett Ritchie.

Marner and Tavares were then stopped at the other end by Khudobin, who made his third start of the season with Stars No. 1 goalie Ben Bishop getting the night off.

Toronto, which was blanked by Pittsburgh at home on Oct. 18, had an early power-play chance in the third, but Khudobin stopped Andreas Johnsson on the best chance from the slot.

The Stars doubled their lead after the Leafs defensive zone coverage broke down at 4:43 when Shore took a nice feed at the lip of the crease from Mattias Janmark for his third.

Toronto got another power play moments later, but Marner shovelled one chance wide and Khudobin was there to stop a Nazem Kadri redirection.

The Leafs continued to push, but Tavares lost the puck on a 2-on-1 break before Marner fanned on the follow up for a sequence that summed up Toronto’s night.

With so many No. 1 draft picks in the top 20 in NHL scoring, Rob Pizzo looks at some of the players that didn’t pan out. 1:58

Marleau then hit the post on a shot that went across the face of Khudobin’s goal, bounced off the netminder’s leg and dribbled wide.

The Leafs finally got within one on the power play at 16:51 with Andersen on the bench for a 6-on-4 advantage when Marleau scored his second from the side of the net.

Tavares then had the puck roll off his stick on another great chance with just over a minute to play before Marner was robbed by Khudobin in the final seconds.

The Leafs were playing their second game since learning Monday that star centre Auston Matthews will be out until at least Nov. 26.

Coming off Monday’s listless loss to Calgary, Toronto had the best chance of the first when Tavares, who was in the spot usually occupied by Matthews on the left side of the Leafs’ No. 1 power-play unit, rang a shot off the crossbar on the game’s first man advantage.

The Leafs’ power play, which started the season 9 for 19 through the first seven games, came in 1 for 12 over its last five, with the only goal coming just as a two-man advantage expired against Calgary on Monday.

Dallas, meanwhile, entered play having killed off 19 straight penalties against.