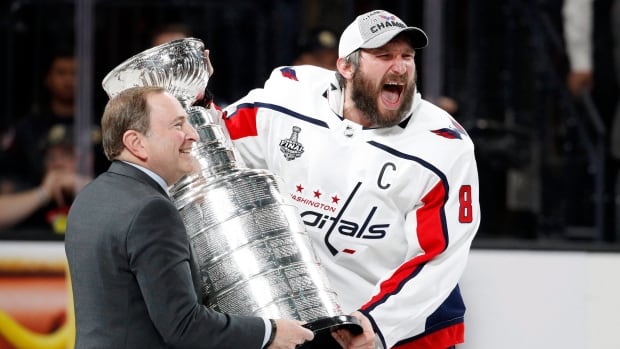 Alex Ovechkin has already done a “keg stand” with the Stanley Cup, performed shirtless pushups in a fountain full of teammates and lifted hockey’s prestigious trophy so often in joy that it could be considered upper-body training.

“That’s my summer workout,” said Ovechkin, with a smile.

The Summer of Ovi is just beginning.

Over the next few months, Ovechkin will return home to Moscow and have his day with the Cup, celebrate Russia hosting the World Cup and become a father when wife Nastya gives birth to their first child. For the first time in the superstar’s 13-year career, the off-season won’t include questions about whether he can get it done in the playoffs and help the Washington Capitals win it all.

“He deserves it,” friend and Capitals teammate Alex Chiasson said. “There’s been a lot of critiques on him and all that stuff, and now he’s proven so many people wrong.”

Ovechkin cemented his legacy with a playoff MVP performance and a Stanley Cup ring so glaringly missing from his resume. Next he faces the significant challenge of not letting his game slip. Ovechkin turns 33 in September, so with all the partying and momentous occasions on and off the ice, it’s up to him not to slack off.

“It’s going to be a short summer,” Ovechkin said. “Of course, you’re going to celebrate, but you don’t want to lose your shape. We’re going to spend one month in Russia and come back here to get ready for the kid, for the child. And get ready for next year.”

Last summer, Capitals coach Barry Trotz visited Ovechkin in Moscow and delivered the message that the team needed more from him. He delivered with a league-leading 49 regular-season and playoff-best 15 goals, and was the driving force on the way to Washington’s first championship.

Trotz is gone after resigning, so Ovechkin can’t lean on a relationship cultivated during the past four years. Longtime assistant Todd Reirden is considered the front-runner to be Ovechkin’s sixth NHL coach as he tries to replicate the goal-scoring success not seen from a player of his age since Hall of Famer Phil Esposito in the 1970s.

“He’ll be the same next year,” MacLellan said. “I don’t know what we can tell him. Tell him to work on his keg stands? He was outstanding this year. I really think the success he’s had this year in the playoffs is going to carry over to next year. He’s excited about playing, he’s excited about winning. You can just feel it in him.”

Ovechkin’s excitement culminated with an almost incredulous look back at his teammates before he accepted the Stanley Cup from Commissioner Gary Bettman in Las Vegas on June 7 and handed it to Nicklas Backstrom in what he called the easiest decision of his life. He and Backstrom were back on the Strip at the NHL awards show on Wednesday night, the latest stop on his whirlwind tour with the Cup. Stops have included the Hakkasan nightclub with Tiesto, several Washington-area bars and restaurants, Nationals Park, the parade down Constitution Avenue and visits to a local rink, police station and hospital. He has slept with the Cup, hugged it and adored it as much as any player.

Ovechkin wants to share the Cup back home with his family — “my grandma, she will touch it, she will kiss it,” he said — and take it to his childhood program, the Dynamo Hockey School. That’s his way of paying it forward after Russian-born Red Wings champion Igor Larionov brought the Cup to the locker room when he played for Dynamo Moscow and it served as inspiration to him and others.

The Washington Capitals celebrated their Stanley Cup win by throwing out the ceremonial first, and as it turned out, second pitch at the Washington Nationals game. 1:14

“He showed us how he practices, how he enjoyed the moment to be in the NHL and be a Stanley Cup champion,” Ovechkin said. “It was something special. One day, I wanted to be in his position to raise the Cup and in the future I will share this moment with some kids. Because when you’re a kid, you don’t know what your life is going to be, who you’re going to be.”

Soon, Ovechkin and his wife will have their own kid, and he called becoming a father “the best feeling ever.” MacLellan said during the playoffs he believes getting married helped Ovechkin mature as a hockey player, and Trotz expects the Great 8 to be a great dad and not lose a step on the ice.