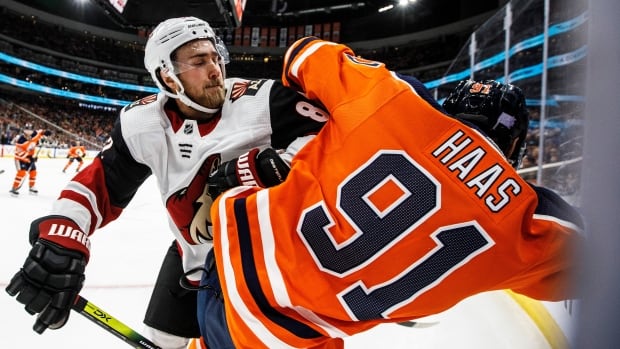 Derek Stepan scored in overtime as the Arizona Coyotes came away with a 3-2 victory over the Edmonton Oilers on Monday.

Stepan took a feed from Nick Schmaltz and picked the corner 2:01 into the extra period.

Connor McDavid and Gaetan Haas responded for the Oilers (10-4-2), who had a two-game winning streak snapped.

The Oilers only needed 91 seconds to get on the scoreboard as McDavid had a highlight-reel goal, undressing Coyotes defenceman Oliver Ekman-Larsson and blowing past goalie Darcy Kuemper to record his seventh goal of the season.

The Edmonton forward showed off his speed by blowing past Ekman-Larsson to score. 0:59

Grabner beat Oilers starter Mikko Koskinen stick side with a wrist shot to tie the game 1-1 for Arizona 3:30 into the first period.

Soderberg took advantage of a turnover by Edmonton defender Joel Persson to make it 2-1 for the Coyotes before the midway mark of the game, beating Koskinen high to the glove side.

Haas tied it up with 4:41 left in the third period. He tipped a Matt Benning shot past Kuemper for his first career NHL goal, forcing overtime.

The Coyotes are in Calgary to face the Flames on Tuesday while the Oilers remain home to take on the defending Stanley Cup champion St. Louis Blues on Wednesday.