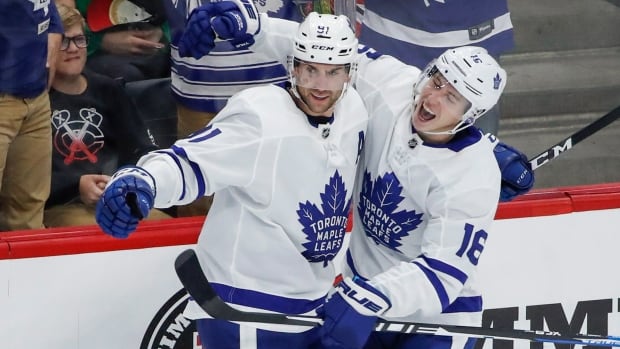 John Tavares had his first hat trick as a Maple Leaf and Morgan Rielly scored 19 seconds into overtime as Toronto spoiled Chicago’s home opener with a wild 7-6 victory over the Blackhawks on Sunday night.

Auston Matthews added two goals and two assists for Toronto in the opener of a four-game trip. Rielly also had two assists and Kasperi Kapanen finished with a goal and an assist, helping the Maple Leafs bounce back from Saturday night’s 5-3 loss to Ottawa.

Garret Sparks, who is from the Chicago suburb of Elmhurst, Ill., made 25 saves to get the win in his first NHL game since 2016.

Chicago was looking for its first 3-0 start since the 2012-13 season, but it was unable to clamp down on Toronto’s high-scoring lines. Patrick Kane scored twice in the final two minutes of regulation, and defencemen Duncan Keith and rookie Henri Jokiharju each had three assists.