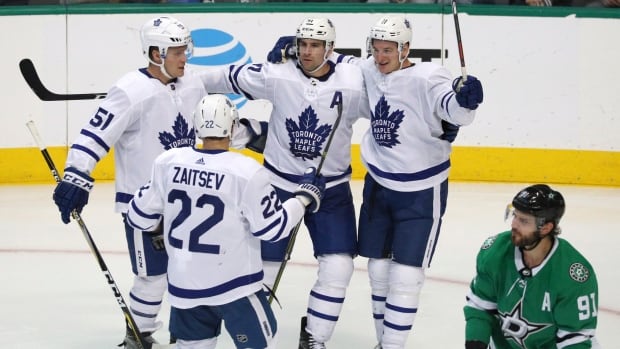 Auston Matthews and John Tavares each had two goals, and the high-scoring Toronto Maple Leafs beat the Dallas Stars 7-4 on Tuesday night.

Toronto defenceman Morgan Rielly had a career-high four assists after he scored the winning goal in Sunday night’s 7-6 overtime win at Chicago. Mitchell Marner had a goal and three assists as the Maple Leafs improved to 2-0 on a four-game trip.

Led by Matthews and Tavares, Toronto has won three of its first four games. Matthews has seven goals and three assists already. Tavares, who signed a blockbuster deal with his hometown Maple Leafs this summer, has scored five of his six goals in the past two games.

Here’s why this NHL season is already so entertaining:

Tyler Seguin had a goal and three assists for Dallas, and Alexander Radulov finished with a goal and two assists.

Frederik Andersen had 30 stops for the Maple Leafs.