John Tavares scored against his former team in the third period as the visiting Toronto Maple Leafs clinched a playoff berth with a 2-1 victory over the New York Islanders on Monday in Uniondale, N.Y.

DefensemanCalle Rosen scored his first career NHL goal and Frederik Andersen made 28 saves for the Maple Leafs, who averted a season sweep by New York and moved within four points of second-place Boston in the Atlantic Division.

Jordan Eberle scored to extend his goal-scoring streak to three games for the Islanders, who fell for the second time in six contests to remain just two points ahead of third-place Pittsburgh in the Metropolitan Division.

New York’s Robin Lehner, who made 36 saves on Monday, turned aside 105 of 108 shots in the season series.

Tavares was booed throughout the game in his second visit to Long Island after signing a seven-year, $77 million contract in the offseason. He added to the negative response by depositing Mitch Marner’s drop pass into the top left corner of the net for his team-leading 46th goal to give Toronto a 2-0 lead at 3:50 of the third period.

John Tavares put Toronto up 2-0 with his first goal against his old team. 0:32

The Islanders scored on the power play to trim the deficit with 5:05 remaining in the third. Defenseman Devon Toews, who hit the post earlier in the period, sent the puck toward the net and Brock Nelson settled it before backhanding a feed for an easy conversion for Eberle.

Rosen, who was recalled from the Toronto Marlies of the American Hockey League on Sunday, wristed a shot from the point that floated past Lehner to open the scoring 2:17 into the second period. The 25-year-old Rosen was playing in his fifth career NHL game, with the previous four coming last season.

Toronto star forward Auston Matthews crumbled in a heap after he was hit in the foot by a shot from New York defenseman Adam Pelech in the second period. He skated slowly to the bench but remained in the game. 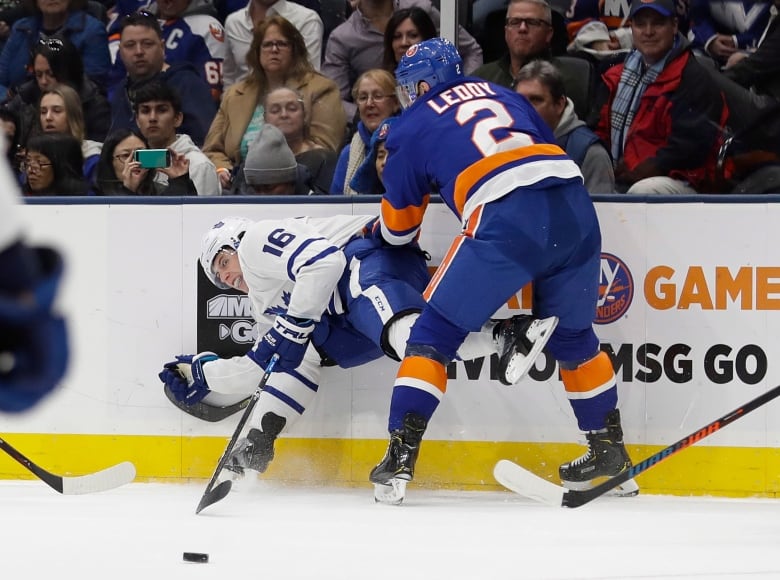 Toronto’s Mitch Marner is checked into the boards by the New York Islanders’ Nick Leddy in the Leafs’ 2-1 win on Thursday. (Frank Franklin II/Associated Press)