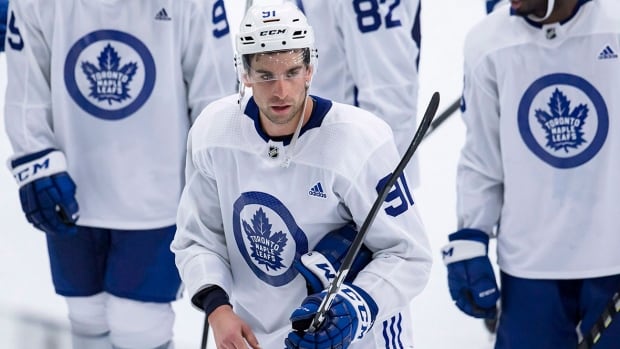 John Tavares still gets nervous before every game — and not just for his first one wearing the blue and white of the Toronto Maple Leafs.

Tavares will make his Leafs pre-season debut Tuesday night when Toronto takes on the Ottawa Senators in Lucan, Ont.

The star centre joined the Leafs in a dramatic free-agent signing on July 1 after nine seasons with the New York Islanders, inking a deal with the team he cheered for as a kid growing up in the suburbs west of Toronto.

“Any time I play there’s always jitters,” Tavares said inside the intimate 1,300-seat Lucan Community Memorial Centre after the Leafs’ morning skate. “That’s the feelings you have as a hockey player since you’re a kid until now. Those feelings are the same. The first game of the year is always that same type of butterfly excitement.

“Just looking forward to getting out there, competing and playing hard.”

On the other side, Ottawa will be suiting up for its first game since last week’s trade that saw star defenceman Erik Karlsson shipped to the San Jose Sharks for four young players and two draft picks, ending a prolonged saga between the team and its captain.

The Senators have been dogged by off-ice controversy over the last 12 months, including Karlsson’s wife accusing the fiancee of former teammate Mike Hoffman of cyberbullying, the resignation of assistant general manager Randy Lee amid harassment allegations, and the recent awkward team-produced video of owner Eugene Melnyk being interviewed by defenceman Mark Borowiecki.

Melnyk also mused about the possibility of moving the Senators on the eve of his outdoor game in December, but has since backed off.

Ottawa centre Matt Duchene said his teammates are just excited to get back playing.

“We’ve tuned it out pretty good in the locker room,” he said of the distractions. “It’s been really solid from the coaches to the players. We’re not letting it affect us. We’re looking forward to the season.”

“It’s finally great to get into some game action,” Tavares said. “For myself, it’s been a little while. Nice to get back into that competitiveness, a lot of those things you need to get prepared for the regular season.”

Tavares, Kadri and Marner all played junior for the London Knights of the Ontario Hockey League, as did Ottawa rookie Alex Formenton, making Tuesday a homecoming of sorts.

Kadri is from London, as is Ottawa’s Dylan DeMelo, one of the players involved in the Karlsson trade.

“It’s exciting to see the community of Lucan get so excited,” Kadri said. “They’re passionate fans.”