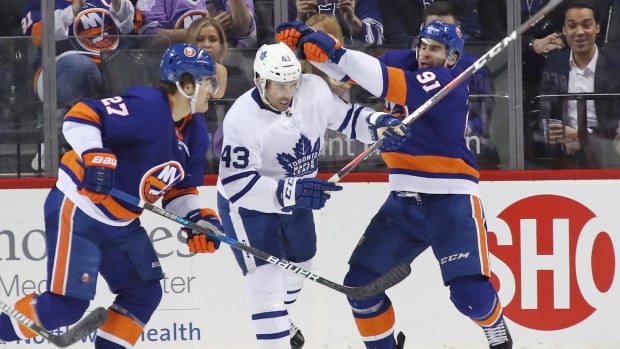 Nazem Kadri has always seen himself as a No. 1 centre, but he’d have no problem being No. 3 on the Toronto Maple Leafs’ depth chart this season after the addition of John Tavares.

Toronto strengthened itself up the middle July 1 by signing free-agent Tavares to a seven-year, $77-million US deal. The 27-year-old Mississauga, Ont., native had 272 goals and 621 points over nine seasons with the New York Islanders.

The addition of Tavares (37 goals, 47 assists last season) leaves Toronto three-deep at centre with young star Auston Matthews (34 goals, 29 assists) and Kadri (32 goals, 23 assists). If Tavares’ arrival pushes Kadri to the third line, the 27-year-old London, Ont., native would be fine with it.

“Winning is the most important thing to me,” Kadri said Tuesday prior to participating in the NHL Classic at Glen Abbey Golf Club in Oakville, Ont. “I know that’s maybe a cliche but that’s just the honest truth.

Fresh off signing a seven-year deal with the Toronto Maple Leafs, John Tavares spoke to the media about his decision to come home and realize a boyhood dream. 1:29

“I don’t care where I play, I don’t care what role I play. Obviously I want to be an impact player and continue to have the success I’m having . . . at the end of the day our ultimate goal is to win a Stanley Cup and bring that to the city of Toronto so we’re all going to be on the same page.”

“Not so sure,” he said. “There’s definitely some good centremen out there but we’re trying to generate some chemistry between the three of us.

“Hopefully we look to be on the power play together and we’ll see how it works.”

Toronto (40-27-15, 95 points) finished third in the Atlantic Division last season but was eliminated in the first round of the Eastern Conference playoffs in seven games by the Boston Bruins. Despite that setback, right-winger Connor Brown said it will be hard for the Leafs to surprise opponents this season.

“Two years ago we were kind of sneaking up on teams and last year everyone was a little bit more prepared,” he said. “You’re going to get everyone’s best and so you’ve got to bring your best every day.

“It (seven-game playoff loss) is a tough thing to go through for the city and the fans but also as a player. But you’ve got to control the controllables and all you can do is put together something better the next time.”

The prospect of playing alongside three top-flight centres this season certainly excites the six-foot, 185-pound Brown.

“Those guys, they’re all very dynamic and so it doesn’t matter who you get,” he said. “You’re going to have a good centreman and usually that’s a recipe for success.”

A fact not lost upon centre Logan Couture of the San Jose Sharks, who were also in the running for Tavares.

“To find three centremen like that is tough,” he said of the Leafs’ trio. “They’re going to be tough to match up against for teams, especially in their own division.

“There are a lot of good centremen but to find those three on the same team, that’s impressive.”

“There’s going to be some mismatches for sure,” said Hall, who went first overall to Edmonton in the 2010 NHL entry draft. “You’ll probably see them have a very good home record with Babcock being able to match up and really have the players he wants out there.

“He (Tavares) went there because they’re a strong team, they have a bright future. I think everyone sees that.”

Tavares has been skating with his new teammates this week and left-winger Josh Leivo said Tavares’ work ethic is contagious.

“It’s just motivating us to work even harder,” Leivo said. “He works really hard so I think he pushes us even more in the gym.

“It’s exciting to have him on our team.”

The move reunites Tavares with Kadri, who were teammates with the OHL’s London Knights. Kadri said the biggest improvement in Tavares’ game has been his skating ability.

“Right from the beginning he was so gifted, he was just so much better than everyone else,” Kadri said. “His hands and hockey sense were just off the charts.

“But he’s worked on his skating since I saw him recently and obviously played against him the last few years. It’s been a big improvement for him.”

“He’s just a natural-born scorer and that presence was very annoying for opposing teams to play against,” he said. “He was the full package.

“JVR is a good player and I couldn’t be happier for him.”