The Buzzer is CBC Sports’s daily newsletter. Subscribe here to get it delivered directly to your inbox every weekday.

Here’s what you need to know right now from the world of sports:

Let’s get you ready for the NHL playoffs

They start tomorrow night. Whether you followed the season closely or not, here are some quick, big-picture things to get you up to speed for the most important — and fun — time of year for hockey.

And deservedly so. They had one of the most dominant regular seasons ever, matching the record for wins (62 in 82 games) and finishing first overall by the widest margin in 23 years. Tampa is stacked: Nikita Kucherov ran away with the scoring title by piling up 128 points (the highest total since Mario Lemieux and Jaromir Jagr in 1995-96), Steven Stamkos and Brayden Point are high-end scorers too, Victor Hedman anchors the defence and Andrei Vasilevskiy is a really good goalie. But… the team that wins the regular season tends to fall short in the NHL playoffs. The last five failed to get past the third round, and only two have won the Cup since the salary-cap era began 13 years ago.

The defending champs could win again

A lot of people expected a Stanley Cup hangover (maybe even a literal one) after Alex Ovechkin and his teammates celebrated the franchise’s first championship last spring. But Ovechkin scored 51 times to win his record eighth goal-scoring title, and the Caps came on strong at the end of the season to take their division again. That puts them in line for another second-round showdown against Sidney Crosby’s Penguins. But first, Washington has to beat a very good and very energetic Carolina team that finally has enough goaltending to do some damage.

Speaking of the Hurricanes, they’re the feel-good team of the year

It’s always nice when a team that missed the playoffs nine years in a row gets back in. But the ‘Canes won over a lot more fans than your typical surprise team with their unique victory celebrations. They weren’t for everyone — professional curmudgeons Brian Burke and Don Cherry hated them — but the celebrations were a hit with lots of younger fans. As far as the actual hockey product, young forwards Sebastian Aho and Teuvo Teravainen had great years, and Nino Niederreiter was a nice midseason trade acquisition.

Vegas fans should realize they’re playing with house money after the Golden Knights made expansion-team history by reaching the Cup final. But expectations went up after the team added Paul Stastny in the off-season and the brilliant Mark Stone before the trade deadline. Vegas’ forwards can still run you into the ground, and Marc-Andre Fleury can still come up big in net, but the Knights drew a tough first-round opponent in San Jose. The series is a toss-up.

No Canadian team has won the Cup since Montreal in 1993, but Calgary could do it just a year after missing the playoffs. The Flames finished second in the overall standings and they have serious firepower. Johnny Gaudreau is a 165-pound joy to watch; Sean Monahan, Elias Lindholm and Matthew Tkachuk are his high-scoring sidekicks; and Mark Giordano is one of the best defenceman in the game. Calgary’s goaltending situation is weird, though. Mike Smith and Dave Rittich split time this season, and a starter still hasn’t been named for Game 1 against Colorado.

Something’s wrong with the Jets

They were Canada’s best playoff team last year and may have won the Cup had they not burned themselves out beating rival Nashville in the second round. But the whole operation has seemed a little off this year and the Jets limped through the last two months of the season. Now they face their opposite — a red-hot St. Louis team that was dead-last in the league on Jan. 2 before winning 30 of its final 45 games. That run coincided with the arrival of rookie Jordan Binnington, who was one of the NHL’s best goalies over the second half. Here’s an idea of how much these teams’ reputations have diverged: even though Winnipeg has home-ice advantage in this series, St. Louis is the slight favourite in the betting odds.

The Leafs are cursed

Yes, there’s the 52-year Cup-less spell, but something less supernatural is haunting the Leafs: the NHL’s brutal playoff format. Even after sleepwalking through the last few weeks, Toronto finished with the seventh-best record in the league. But it will have to beat No. 3 Boston and then likely No. 1 Tampa just to make it to the conference finals. The Leafs have the talent to do it, as long as star forwards John Tavares, Auston Matthews and Mitch Marner and goalie Frederik Andersen are at their best and the leaky defence holds up. 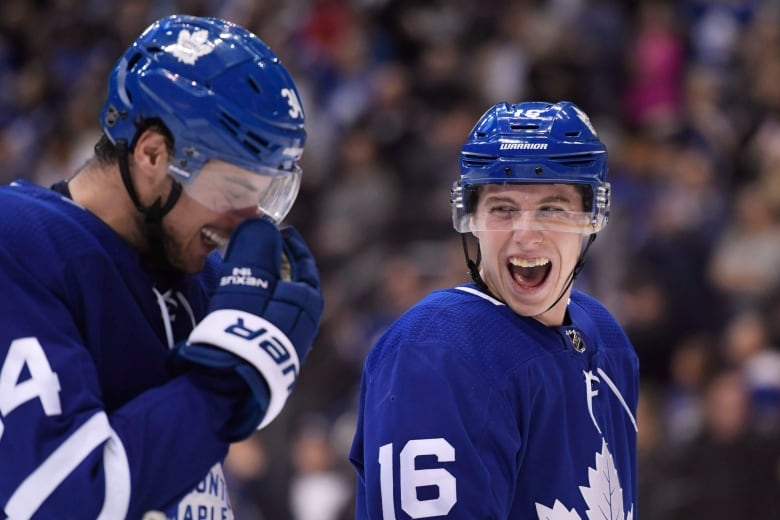 The Leafs are a really good team, but their playoff path is no joke. (Nathan Denette/Canadian Press)

Other stuff we’re talking about today

The NHL draft lottery is tonight — and the Senators are very nervous. Normally, the team with the worst record is anxiously hoping its name will be drawn for the first-overall pick. But Ottawa is worried about something else: it traded its top choice in this year’s draft to Colorado back in 2017, setting up the potentially embarrassing scenario of the Avalanche winning the right to choose the best player this year (scouts say it’s teenage American forward Jack Hughes). Colorado has an 18.5% chance of winning, followed by L.A. (13.5%) and New Jersey (11.5%). All the teams that didn’t make the playoffs are eligible to win — provided they kept their pick, of course.

The NHL made an example of Slava Voynov. The former L.A. Kings defenceman had been under indefinite suspension since his arrest for domestic abuse in the fall of 2014. Police said he punched, kicked and choked his wife at their California home. Voynov pleaded no contest to a misdemeanour and played the following three seasons in his native Russia after the Kings terminated his $25-million US contract. His conviction was dismissed by a U.S. judge last summer, and he was hoping to be reinstated by the NHL. Today, the NHL suspended him for the entire 2019-20 season and playoffs after commissioner Gary Bettman ruled that Voynov “engaged in acts of domestic violence directed at his wife.” The NFL has come under heavy criticism over its inconsistent punishments for domestic violence, and the NHL seems to be making sure that won’t happen with this one.

It’s playoff time at the women’s world hockey championship. Canada beat host Finland 6-1 today to finish the round robin with a 3-1 record. The only loss was to the United States, who the Canadians will likely meet in the final for the 19th consecutive time. Canada’s first playoff game is Thursday vs. Germany. Captain Marie-Philip Poulin’s status is up in the air after she reinjured her knee in yesterday’s game. She didn’t play today.

Virginia went from college basketball laughingstocks to champs. Last year, the Cavaliers became the answer to a trivia question for the rest of time: who was the first No. 1-seeded team to lose in the first round of the NCAA men’s tournament? They were in danger of becoming the second this year when they trailed by six at the half in their opening game. But Virginia rallied and went on to win three straight thrillers to reach the title game. Against Texas Tech last night, the Cavaliers hit a game-tying three with 12 seconds left before pulling away in overtime to win one of the more heartwarming championships in recent memory.

Chris Davis is trapped in a nightmare. The Orioles’ supposed slugger went 0-for-5 last night to run his hitless streak to 49 at-bats. That’s the longest in major-league history for a non-pitcher. Davis’ downfall is stunning. The big man always struck out a lot, but he led the majors in home runs in both 2013 and ’15 and was a viable hitter as recently as 2017. But he cratered last year, hitting .168 — the worst average ever for a player with enough at-bats to qualify for the batting title. Oh, and he’s less than halfway through a seven-year, $161-million US contract. That money is guaranteed as long as he doesn’t retire, so Baltimore keeps trotting him out there in hopes he turns things around — or maybe gives up. But Davis wants to keep cashing those cheques, and the price of that is daily humiliation.