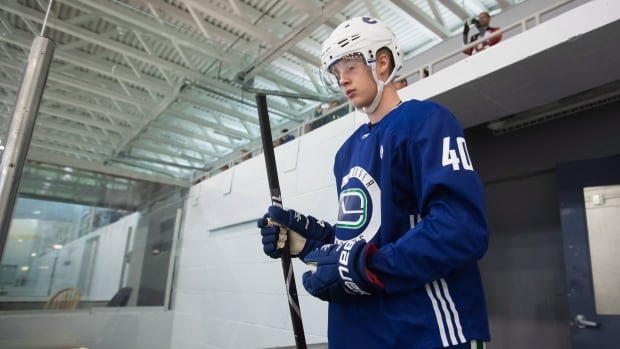 One shot is all it took for Elias Pettersson to get Vancouver Canucks fans out of their seats.

The Swedish rookie had a dream debut, tallying his first career NHL goal on his first shot and adding an assist against the Calgary Flames in Vancouver’s season opener.

Fitting then that just hours earlier, Pettersson was getting compared to Pavel Bure for his electrifying playing style.

Vancouver beats Calgary 5-2, Elias Pettersson records a goal and an assist in his NHL debut. 1:45

Before the season opener, Province reporter Patrick Johnston spoke highly of Pettersson in an interview with CBC Vancouver’s Dan Burritt.

“Even that first game in preseason and I said it, I didn’t apologize for it, it reminded me of [Bure’s] debut in 1991. Neither young player scored, Bure didn’t score, but it got people out of their seats. Once they saw who Pettersson is and the more they see of him, they’re really going to be excited.”

So who is the teenager in whom Canucks’ fans have placed their hopes and can he fill in the shoes left by Henrik and Daniel Sedin?

If you’re going to hear his name often, you’ll want to be able to say his name properly (or at least correct others if they say it wrong).

However, you’re more likely to hear the anglicized version in daily conversations and hockey broadcasts: petter-son

Still unsure on how to say it correctly? Hear it from Pettersson himself.

In his only year in Sweden’s top hockey league, Pettersson led the Växjö Lakers to its second championship.

And he did so in outstanding fashion.

At the Swedish Hockey League Awards, Pettersson was named Rookie of the Year, Forward of the Year and league MVP.

Though he did come up short at the 2018 IIHF World Junior Championships, taking silver, Pettersson was named to Sweden’s World Championship team later that year where the country won its second consecutive gold medal at the tournament.

Name already in the history books

Lots of players can lead their team in points, lift trophies or win awards.

But they don’t always set records in the process.

In scoring 56 points last year, Pettersson did just that, becoming the highest-scoring junior player (under-20) in a single season ever in the Swedish Hockey League.

That mark also places him second in points per game in a season as a junior — better than Hockey Hall of Fame member Peter Forsberg and Canucks’ greats Markus Naslund, Thomas Gradin and the Sedins.

According to Johnston, Pettersson has all the skills to be a star.