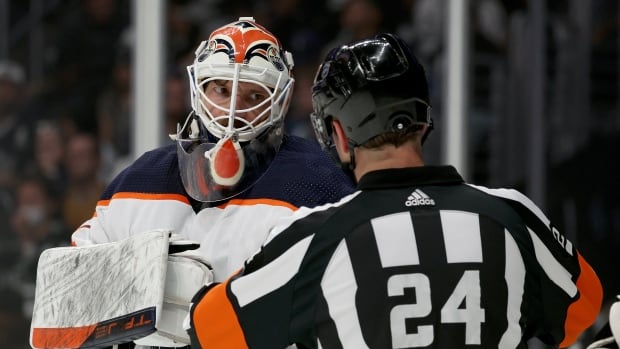 This is an excerpt from The Buzzer, which is CBC Sports’ daily email newsletter. Stay up to speed on what’s happening in sports by subscribing here.

A week into the Stanley Cup playoffs, a few trends stand out. One is that we’re seeing a lot of goals. After a high-scoring regular season in which teams averaged 3.14 goals per game apiece — the most since 1995-96 — it’s up to 3.27 so far in the playoffs.

Another pattern is that just about every series is close. Yesterday’s games ended with four series being tied 2-2, and three more could be even after tonight. The only outlier is the Colorado-Nashville series, where the Cup-favourite Avalanche can complete a sweep tonight after winning the first three games by a combined score of 16-6.

And yet, despite the closeness of seven of the eight series, doesn’t it feel like every game is a blowout? It’s not just a vibe: the average margin of victory in the 28 playoff games so far is about 3.3 goals. Six of the eight series have an average victory margin of more than three goals — including a whopping 4.25 in the Edmonton-L.A. matchup, which is somehow tied 2-2. The only series consistently producing close contests is Calgary vs. Dallas, which the Stars lead 2-1 after rebounding from a 1-0 loss in the opener to win the next two games by two goals each — both capped by an empty-netter. In total, only four of the 28 playoff games have been decided by one goal, with only two going to overtime. That’s strange, especially considering the 16 worst teams in the league are currently sitting at home, which should reduce both the quantity and magnitude of mismatches.

Anytime something weird is happening with NHL scoring, power plays are a good place to look. They’re the easiest way to score, so if teams are getting more of them and/or converting them into goals at a better rate, it might help explain all these bonkers boxscores we’ve been seeing.

A quick crunching of the playoff numbers shows it’s not the latter — power-play success rate is slightly down from the regular-season mark of 20.61 per cent (the highest since 1989-90). But the number of power-play opportunities is up — way up. In the regular season, teams averaged about 2.9 chances with the man advantage per game. So far in the playoffs, they’re averaging a whopping 4.2 per game apiece.

All things being equal, more power plays means more goals, and more goals are good for business. But NHL commissioner Gary Bettman insisted last week that the league has not ordered officials to call more penalties in the playoffs. “The standard is the standard,” he said when asked about the uptick in whistles. “It’s not a regular-season standard, it’s not a playoff standard. We continue to reinforce to the officials, ‘We want you to call the NHL standard.’ And that standard is to reinforce speed and skill and the officials are doing that.” And then some.