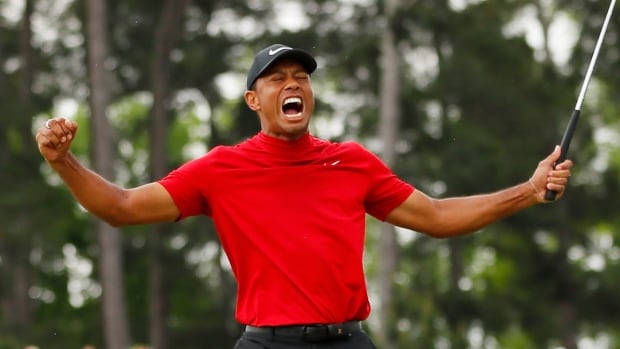 In his trademark Sunday red, Tiger Woods triumphantly glided across the green grass of Augusta. His smile radiated. His emotion was unmistakable. His fist-pumps packed with passion.

He raced to his family after his fifth Masters win, marking one of the greatest comeback stories ever.

Woods then hugged his mother and his 11-year-old daughter, Sam. He clung to those in his moment of victory who stayed by his side through some of the darkest moments of his life.

“For them to see what it’s like to have their dad win a major championship, I hope that’s something they will never forget,” Woods told reporters.

It will forever be one of those great sporting moments people will talk about for a lifetime — an “I remember where I was when Tiger won again,” moment. His 14 years between Masters wins is the most amount of time between winning the green jacket.

“I had serious doubts after what transpired a couple of years ago,” Woods said. “I could barely walk. I couldn’t sit. Couldn’t lay down. I really couldn’t do much of anything. … To have the opportunity to come back like this, it’s probably one of the biggest wins I’ve ever had for sure because of it.”

It’s been a difficult road back for Wood. He’s endured a messy and public divorce, an embarrassing DUI arrest, and a mug shot that made millions of rounds on social media. He was the face of a colossal collapse. Once the villain, Woods is now the face of hope, inspiration and reminded us all anything is possible.

Tigers Woods wins the Masters by 1 stroke for his 15th major tournament victory. 1:41

And for as thrilling and feel-good as Woods’ Masters win was, the end to the USA-Finland women’s world hockey championship final was heart-breaking and cringe-worthy.

It was as if Finland’s historic hockey run at the women’s world championship was etched in the stars — the team, playing in front of a raucous crowd at home, seemed destined to win its first world title, especially considering the nation’s historic semifinal victory over Canada.

But the Finns were facing the defending world champions in the final. Remarkably, the two teams ended up tied 1-1 after 60 minutes of hockey, setting up one of the most absurd, bizarre and controversial sporting finishes ever.

A little over halfway through the overtime period, the Finns scored their golden goal. At 11:33 in the extra frame, Petra Nieminen slammed the puck into a gaping American net.

The crowd erupted in a blue and white celebration of joy and disbelief. The team blasted out of its bench and onto the ice. They threw their sticks and gloves. The Americans hung their heads. It was over. It was historic. Finland had won its first-ever women’s world hockey title.

But the celebration came to a halt. The goal went under video review — was it goaltender interference?

A Finnish player had made contact with the American goalie as she passed in front of the net. Nieminen had a near-empty net at which to shoot and score.

After an agonizing delay, which saw the Finnish team come together in a prayer circle as the crowd chanted, the referee signaled no goal. There was disbelief in the crowd mixed with confusion and anger.

Finland’s goal was waved off for goaltender interference, yet the penalty went to the Americans.

On Monday, the IIHF issued a statement regarding their ruling, saying it the goal was called back due to non-incidental goaltender interference and that two rules were considered.

It was supposed to be a watershed moment for a sport that’s been far too predictable since it burst onto the world stage at the 1998 Olympics. The only drama that ever came of past championships was whether Canada or the United States would win. For a few minutes Finland had won. And they had it ripped away.

On Sunday, Finnish hockey fans learned just how unfair sport can be at times.

Finally, who had the New York Islanders and Columbus Blue Jackets leading their first-round series 3-0?

Tampa Bay won 62 games this season, tying the NHL record set by the 1995-96 Detroit Red Wings. The Lightning finished the season with 128 points, fourth in NHL history. Perhaps more impressive, they won the Presidents’ Trophy by a 21-point margin.

They were supposed to steamroll the Blue Jackets — a franchise that has yet to win a playoff series. And yet, the Blue Jackets have now put the mighty Lightning on the verge of elimination.

And then there’s the situation unfolding between the Islanders and the Pittsburgh Penguins. Perhaps not as shocking or jarring as what’s taking place between the two aforementioned teams but still remarkable to watch.

The Islanders have outscored Pittsburgh 11-5 through the first three games of the series. Nothing about their game is flashy or fancy. However, their will to win is evident.

The New York Islanders beat the Pittsburgh Penguins 4-1 in Game 3 and now have a 3-0 lead in their best-of-seven 1st round series. 1:14

Don’t count the Penguins out yet though. Never count out Sidney Crosby. But the Islanders are now one win away from advancing past the first round of the playoffs for the first time since 1993.

But on Sunday, the NHL playoffs proved just how unpredictable sports can be.