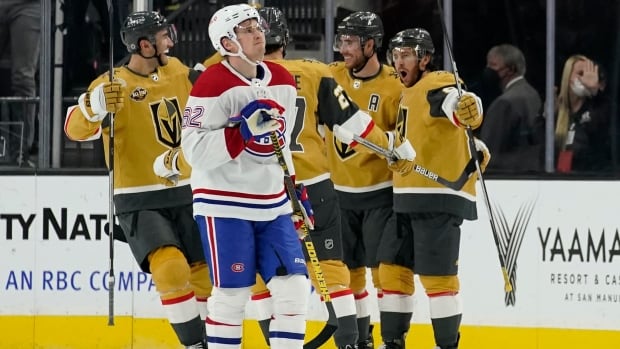 The Golden Knights salvaged the final game of an extended homestand after two road games were postponed due to COVID-19, closing out the stretch 3-3-2 before opening a rugged road trip Monday at Washington.

Lehner made three huge stops early in the overtime, and Montembeault turned away Karlsson on a breakaway. Theodore grabbed a loose puck off the ensuing faceoff, skated to the slot and beat Montembeault.

if you’re reading this, Shea Theodore has better hands than you <a href=”https://t.co/Jz52QcqcCl”>pic.twitter.com/Jz52QcqcCl</a>

The Canadiens, who have just eight victories this season and arrived in Vegas after a win in Dallas, have yet to post back-to-back wins this season.

Stephenson, playing in his 300th career game, opened the scoring early in the first period when he one-timed a loose puck in the slot past Montembeault.

Montreal tied it later in the period when Pezzetta skated into the slot and fired the rebound from Artturi Lehkonen’s shot past Lehner glove side.

As tempers flared in the second period, Karlsson scored his sixth of the season during a power play, when he took linemate Marchessault’s pass, skated down the slot and snapped a backhand off Montembeault’s arm and into the net.

It was Montreal’s turn with an extra man, when former Golden Knight Nick Suzuki sent a pass from behind the net to Toffoli, who was at the doorstep to slip it by Lehner, making it 2-2 late in the second period. It was Toffoli’s second goal in two games after missing 11 games with an injury.

The Canadiens took their first lead of the night when Lehner appeared to briefly lose sight of the puck’s whereabouts and was late in reacting to Hoffman’s snapper from the left circle that gave Montreal a 3-2 lead early in the third period.

Marchessault reignited the announced crowd of 18,121 with a power-play goal to tie the game midway through the period.