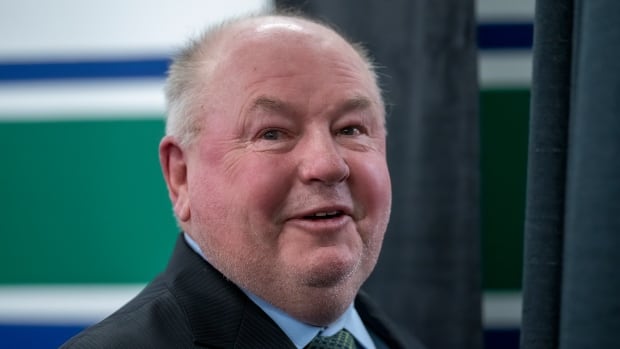 Bruce Boudreau will return as head coach of the Vancouver Canucks after helping to turn the struggling NHL club around as a mid-season replacement.

The Canucks confirmed in a release Friday that the 67-year-old Boudreau will return for the 2022-23 campaign.

Boudreau took over behind the bench on Dec. 5 after the Canucks cleaned house following a disastrous 8-15-2 start to the season, resulting in the dismissal of head coach Travis Green and general manager Jim Benning.

Boudreau’s hiring made an immediate impact as he became just the third coach in NHL history to win his first seven games with a new team.

The Canucks went 32-15-10 the remainder of the season and went from last place in the Pacific Division to finish five points out of a playoff berth.

Boudreau coached his 1,000th regular-season game on Jan. 23, and is one victory shy of the 600-win milestone.

“We are pleased to see Bruce’s commitment to return to the Canucks next season,” Canucks general manager Patrik Allvin said in the release. “He has done a great job since arriving in Vancouver and we are eager to see the team continue to perform under his leadership as they did during the second half of the season.”

Boudreau has a career coaching record of 599-317-125 in 1,024 regular-season games with the Canucks, Minnesota Wild and Anaheim Ducks.

The Toronto native won the Jack Adams Award as NHL coach of the year in 2008.

“My desire has always been to come back to coach this team,” Boudreau said in a release. “I love the organization, city, fans and the players. I’m also grateful for the opportunity provided to me by [president of hockey operations Jim Rutherford] and Patrik to continue building what we started.”