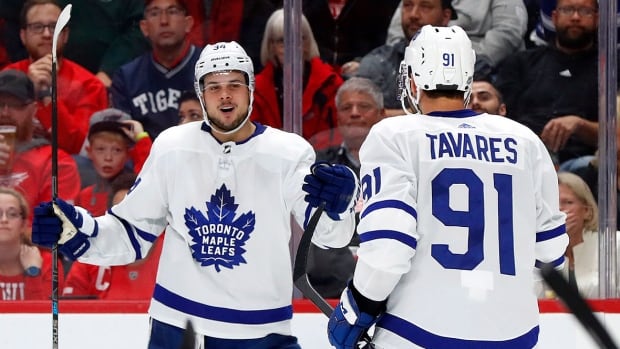 The world of the Toronto Maple Leafs can take on extreme tendencies. During the low times we’ve seen fans become so disgusted they have tossed sweaters of their beloved team over the glass and onto the ice.

During good times, like right now with the club’s high-flying 6-1-0 start, the fickle fanbase is full of optimism and belief that this may be the season the Maple Leafs finally put an end to their 51-year Stanley Cup drought.

The remarkable start of Auston Matthews and the Maple Leafs is reminiscent of 25 years ago when Doug Gilmour and Co. ran off a league-record 10 wins in a row to begin the 1993-94 season (it was later matched by the 2006-07 Buffalo Sabres).

Toronto senior advisor Cliff Fletcher was the architect of that 1993-94 Maple Leafs club. As he intently sat in the stands watching the current edition go through its morning skate routine prior to their 4-1 win at home against the Los Angeles Kings on Monday, we asked the veteran hockey man to reminisce about that team 25 years ago.

“These teams are so different,” Fletcher said. “Our team 25 years ago was a veteran team with Gilmour, [Dave] Andreychuk, [Dave] Ellett, Wendel [Clark]. This team is much younger. This team has its future and its best hockey ahead, whereas in 1993-94 that team was built for the short term.

“The game also is so much different. There is so much speed in the game today. This team can go on to great things in future years.”

The 1993-94 Maple Leafs began the season four months removed from a trip to the conference final, a series they led 3 games to 2 only to see Wayne Gretzky and the Los Angeles Kings take the sixth game 5-4 during a controversial overtime in Hollywood, and survive the deciding match 5-4 in Toronto.

Controversial non-call leads to Game 6 OT winner by Great One. 5:47

For Toronto, expectations a few months later were sky-high because after coming so close to the Stanley Cup Final the previous spring. But the Maple Leafs also were aided by a team-bonding training camp in London, England, where Toronto played in the two-game French’s Mustard Challenge against the New York Rangers.

The Rangers, who would go on and win the Presidents’ Trophy and Stanley Cup that season, defeated Toronto 5-3 and 3-1. But the close games gave Maple Leafs good vibrations as they headed home to begin the season.

“We built on [the London trip] and we were fortunate to get off to a great start,” said Fletcher, who remembered the league only allowed the Maple Leafs and Rangers to take 24 players apiece. So the Maple Leafs basically had formulated their roster.

“In the end, it was a positive result for us because it was more time for our team to be together. The Rangers were a good team and the games were really competitive. We had a lot of positive vibes.”

The streak saw coach Pat Burns’ side win five times at home and five times on the road.

The Maple Leafs victory string ended in Montreal against the Canadiens with a 5-2 loss. Montreal did a nice job with Kirk Muller and Guy Carbonneau checking Gilmour and goalie Patrick Roy effectively playing the puck so Toronto could not establish its dump-and-chase game.

Still, the Maple Leafs had established a 21-12-6 record by the end of December to easily make the playoffs, but they were eliminated by the Vancouver Canucks in five games in the conference final for a disappointing end to the season.

Toronto went back to the conference final under Pat Quinn in 1998 and 2002, but there have been some lean seasons since.

The Maple Leafs haven’t won a playoff series since 2004. Maybe this year will be different. But there still is a long way to go.