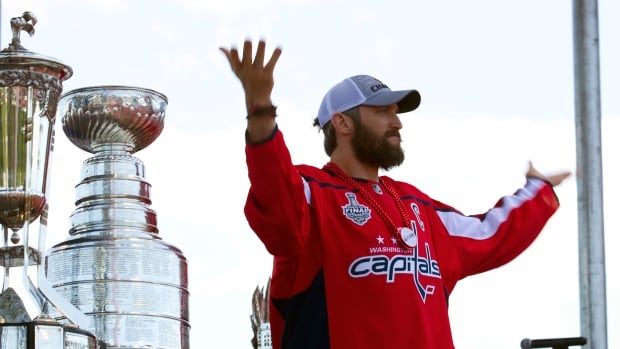 It’s the first sports parade in Washington since the NFL’s Redskins in 1992.

Tens of thousands of fans lined the route along Constitution Avenue, including hundreds on the steps of the national archives creating a sea of red.

Ovechkin sat at the front of the double-decker bus, alternating between resting his arms on the trophy, raising it, and drinking out of his blue Bud Light bottle.

Coach Barry Trotz said the Capitals are going to do it again, and T.J. Oshie led fans in a chant of “back-to-back” at the rally celebrating the Stanley Cup champions.

Ovechkin fired up fans who filled the National Mall down to the Washington Monument by reminding them that he said at the start of the year they weren’t going to be as bad as some thought. Then he and his teammates sang along to Queen’s “We Are The Champions” to complete the rally.

The team was joined by four F-16 Fighting Falcons from the D.C. Air National Guard who performed a flyover.

Season-ticket holders who have remained from the team’s eight-win inaugural season in 1974-75, high school marching bands and the D.C. fire department pipes and drums were  among those participating in the parade.