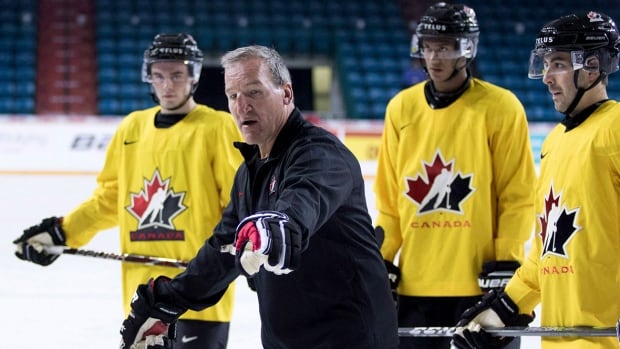 They know Tim Hunter spent 15 seasons playing in the NHL as an enforcer in Calgary, Quebec, Vancouver and San Jose. They know he won a Stanley Cup with the Flames in 1989, an entire decade before any of them were born.

And they know Hunter’s now sharing his experience with young players, working to shape the next generation of hockey greats.

“We all know his history and what he did for the game. So it’s really nice to have him behind the bench. He gives great advice for young players, just how to develop and feel comfortable out there,” said Antoine Morand, a forward who’s hoping to make Canada’s squad this winter.

The 57-year-old Calgarian was named head coach of the team last month after being an assistant coach with the squads that took home silver from the 2017 world junior hockey championship and gold from the 2018 tournament. This week, the new role has him in Kamloops, B.C., where Canada is taking part in the world junior hockey showcase.

“Any time you’re involved with Hockey Canada, it’s a real honour and a real thrill,” Hunter said of the promotion.

The Canadians lost only one game in last year’s tournament, dropping a preliminary match against the U.S. 4-3 in a shootout but rebounded to defeat Sweden in the gold-medal final.

Tyler Steenbergen scored with less than two minutes left in the third, leading Canada to a 3-1 win over Sweden. 1:54

The country has won gold 17 times in the 42-year history of the world men’s under-20 championship, but Hunter said its past successes don’t put extra pressure on this year’s team. He said every player already goes in wanting to win it all.

“I want to make sure that we give ourselves the best chance to be in a medal game in January, and play and compete and show the pride of the country in the way we play.”

Maxime Comtois was a forward on the gold-medal winning team and said it’s nice to have Hunter back.

“He’s a really good coach,” said Comtois. “He played a lot, played in the NHL. He knows what we feel on the ice, off the ice, so it’s nice to have him behind the bench.”

Hunter said moving into the head coach role will mean being more of an “eye in the sky,” letting other coaches and staff do their jobs, and being patient when it comes to lines and systems.

Thirty-nine players are on Hunter’s current roster in Kamloops, and the coach said he’s working on developing a unique mindset and style, while still playing the highly skilled game the country is known for.

“It’s summer hockey, but we’re still trying to win and put a template in place to play fast and play the Canadian way,” he said.

Hunter has been coaching since he wrapped up a playing career that saw him put up 138 points and 3,146 penalty minutes in 815 NHL games.

He spent 15 years as an assistant in the league then moved on to developing younger players. For the past four years, he’s been leading the WHL’s Moose Jaw Warriors.

Given his background, coaching just made sense, Hunter said.

“I’ve got a lot of experience and that experience isn’t really of use unless you use it and talk to these young men every day about little things, how to get better both as a person and as a player,” he said.

Jett Woo plays for Hunter in Moose Jaw and said he’s taken lessons from his coach’s time in the NHL.

“He was a pretty gritty player, a hard-working player, and I think those are the things I’ve been able to pick up playing for him — hard work and compete level,” said the young defenceman.

Woo said Hunter will take the time to sit with players, going over video and explaining what they need to work on.

He added off the ice, the coach is a fun guy to talk to and is always ready to crack a joke.

Hunter said developing tight bonds is key to getting players to perform on the ice, noting that he always gets to know his guys both as a person and as a player.

“You can’t have a successful organization or high-level performance team without knowing everyone on the team and their challenges or their wants and needs,” he said.

Those relationships continue after a player has left Hunter’s team. He stays in contact with a lot of the players he’s mentored and sometimes brings them in to talk to his players.

The coaching style has worked for Woo, who said that Hunter has helped him grow into a better player and develop his game to the fullest.

“I can’t say enough good things about him,” he said.