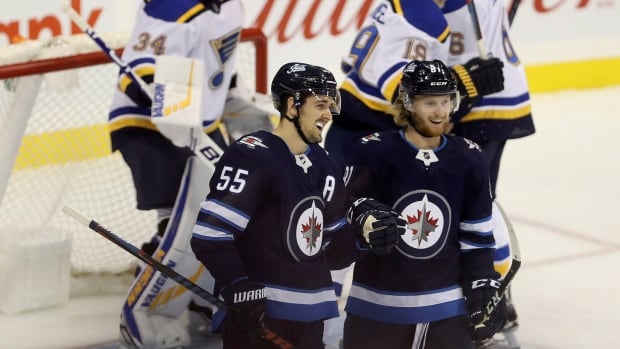 Jacob Trouba scored his first goal of the season 2:54 into overtime as the Winnipeg Jets overcame a two-goal deficit to beat the St. Louis Blues 5-4 on Monday.

Trouba took a pass from Kyle Connor and got in close to shoot into an open side of the net behind goalie Jake Allen.

St. Louis was leading 3-1 heading into the third period when the Jets came out of the dressing room and evened it up with a goal by defenceman Ben Chiarot at 1:00 and Mark Scheifele’s second goal of the game at 3:57.

David Perron quickly regained the lead for the Blues 74 seconds later with a high shot that beat Jets goalie Connor Hellebuyck, but veteran Winnipeg centre Bryan Little flipped a rebound past Allen with 1:40 remaining in regulation.

Ryan O’Reilly scored once and added a pair of the assists for St. Louis. Vince Dunn contributed a goal and assist. Colton Parayko also had a goal and Perron added an assist.

The Blues led 2-1 after the first period.

St. Louis struck quickly when O’Reilly went forehand and then backhand to beat Hellebuyck 47 seconds into the first period.

The lead moved to 2-0 at 10:57 after Jets defenceman Tyler Myers tried to shoot the puck out of his own end, but it went to Parayko’s stick at the point. His shot may have ticked in off a Jets defender.

Winnipeg was outshot 11-2 in the opening 11 minutes, similar to the start of what ended up being a victory over Arizona Saturday.

Scheifele made it 2-1 with an unassisted power-play goal at 12:07 when his shot from behind the net bounced in off Jay Bouwmeester’s skate. Winnipeg has scored at least one power-play goal in five consecutive games.

The second period featured power-play time for both teams.

Winnipeg had almost back-to-back power plays early in the period, but Allen turned aside a couple of quality shots.

Hellebuyck made a glove save on Dunn’s one-timer from the point, but then Dunn got a rebound near the bottom of the circle and made good on that power-play shot to up the lead 3-1 at 9:30.

The Blues began what looked like a lengthy power play after Brandon Tanev was called for boarding O’Reilly and got a five-minute major and game misconduct, but Dunn was called for hooking 15 seconds into the advantage.

The middle period finished with St. Louis ahead 25-16 on shots. Both squads were 1 for 4 on the power play.

The Jets wrap up their six-game homestand Wednesday against Toronto. The Blues return home for a season-high seven consecutive games starting Thursday.