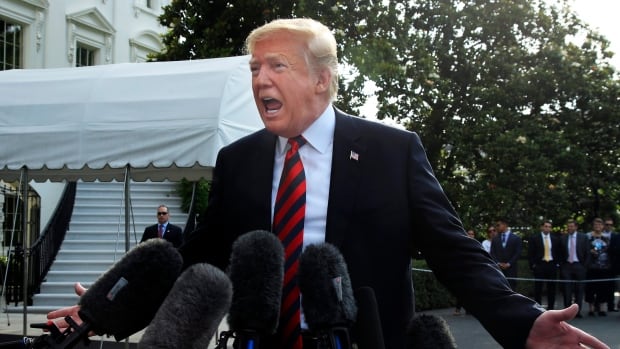 President Donald Trump said Friday he expects to welcome the hometown Washington Capitals hockey team to the White House for winning the Stanley Cup. But he adds: “If they don’t want to be here, I don’t want them.”

Trump congratulated the Capitals on his Twitter feed after the team won the NHL title with a 4-3 victory over the Vegas Golden Knights in Game 5 of the Stanley Cup Final. He singled out series MVP Alex Ovechkin as “a true Superstar” and said the city is “popping” after the Capitals won the team’s first Stanley Cup championship.

The president spoke to reporters on the South Lawn days after he canceled a visit by the Philadelphia Eagles to commemorate their Super Bowl victory after most of the players decided to skip the ceremony.

Before departing for an international summit in Canada, Trump said he wouldn’t invite either the Golden State Warriors or the Cleveland Cavaliers, the two teams in the NBA Finals, but added, “we have other teams that are coming.”

Trump pointed out that he’s had several championship teams at the White House, including the NFL’s New England Patriots and the NHL’s Pittsburgh Penguins.

Capitals forward Devante Smith-Pelly, a Canadian, said prior to the team winning the Stanley Cup that he would not attend any ceremony at the White House.

“The things that he spews are straight-up racist and sexist,” Smith-Pelly said the day before Thursday’s Cup-clinching Game 5 win. “Some of the things he’s said are pretty gross. I’m not too into politics, so I don’t know all his other views, but his rhetoric I definitely don’t agree with. It hasn’t come up here, but I think I already have my mind made up.”

The Capitals will hold their Stanley Cup parade on Tuesday at 11 a.m. ET, riding down Constitution Avenue to the National Mall to celebrate the first championship in franchise history.