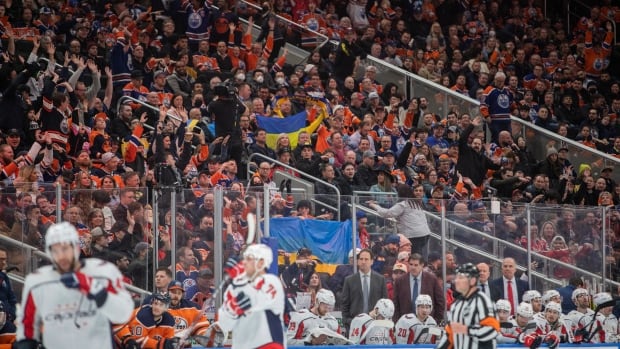 Police in Edmonton say they are investigating an alleged altercation between Ukrainian and Russian supporters.

They say the alleged dispute happened as people were leaving Rogers Place arena after the Edmonton Oilers victory over the Washington Capitals last Wednesday.

Capitals captain Alex Ovechkin has been a vocal supporter of Russian President Vladimir Putin in the past and was booed whenever he touched the puck at the Edmonton match.

Police say in an email that officers diffused the situation and no one was arrested at the time.

A news release from the Ukrainian Canadian Congress in Alberta alleges some of their community members were assaulted by a group of Russian-speaking men outside the arena that night.

The congress says it wants police to investigate the incident as a hate crime.

The attack on Ukrainian community members outside <a href=”https://twitter.com/RogersPlace?ref_src=twsrc%5Etfw”>@RogersPlace</a> last week was completely unacceptable. I spoke with President Boychuk to offer my support and I urge all Edmontonians to remain united and avoid division in solidarity with Ukraine and Edmonton’s Ukrainian community.