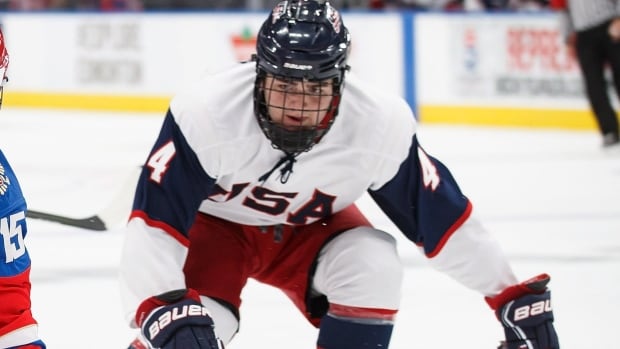 The University of North Dakota said Friday that Arizona Coyotes top draft pick Mitchell Miller is no longer on the school’s hockey team.

The announcement by university president Andrew Armacost came a day after the Coyotes renounced their rights to the 2020 fourth-round pick after learning more about his bullying of a Black classmate with developmental disabilities four years ago.

Miller, an 18-year-old defenceman, is a freshman at North Dakota.

In a letter posted to Twitter, Armacost said: “We expect our students to live by our values in the classroom, in the community and when representing the University on the field of play. After much consideration and discussions with Mitchell, the Miller family, our Athletics Director, Bill Chaves, and Coach Brad Berry, I have decided that the best course of action for Mitchell and the University is that he no longer be a member of the UND Men’s Hockey program. Mitchell may remain a student at UND and we will continue to support his future intellectual and interpersonal growth.”

The Arizona Coyotes parted ways with Miller after taking criticism for selecting him in the fourth round earlier this month despite knowing of his 2016 assault conviction. Arizona acknowledged it knew about the incident when it selected Miller 111th overall, but President and CEO Xavier Gutierrez said they renounced rights to Miller after learning more about the incident and the impact it had on the victim, Isaiah Meyer-Crothers.

Miller pleaded guilty at age 14 to one count of assault and one count of violation of the Ohio Safe Schools Act. He and another teenager were accused of making 14-year-old Isaiah Meyer-Crothers eat a candy push pop after wiping it in a bathroom urinal, and surveillance video showed them kicking and punching him.

Meyer-Crothers told the Arizona Republic earlier in October he was stunned and saddened when he found out the Coyotes drafted Miller, who he said taunted him with racist language and repeatedly hit him when they were growing up in a suburb of Toledo.

Miller sent a letter to all 31 NHL teams acknowledging what happened and apologizing for his behaviour. Meyer-Crothers’s mother, Joni, said Miller never personally apologized to Isaiah or their family other than a court-mandated letter.

Miller is now a free agent.