Edmonton Oilers general manager Peter Chiarelli says he has a Plan B if contract talks remain at a stalemate with defenceman Darnell Nurse.

Chiarelli addressed that and other issues — ranging from Connor McDavid questions to the Erik Karlsson trade — as the team hit the ice for the first time Friday at training camp.

“We obviously couldn’t come to an agreement, but we hope we can get him in camp at some point here shortly,” Chiarelli said, referencing Nurse.

Chiarelli declined to go into specifics on Plan B: “We’ll cross that bridge when (we) come to it.”

The two sides are negotiating a bridge contract coming out of Nurse’s entry-level deal.

Nurse’s absence, and the off-season torn Achilles tendon to Andrej Sekera, their top puck-moving defender, has left the Oilers thin on the blue line.

Chiarelli said help may be coming from farmhands Ethan Bear and Caleb Jones along with top draft pick Evan Bouchard, who is considered so close to being ready for prime time that another year of junior would almost be a waste.

“He moves the puck well,” Chiarelli said of Jerabek. 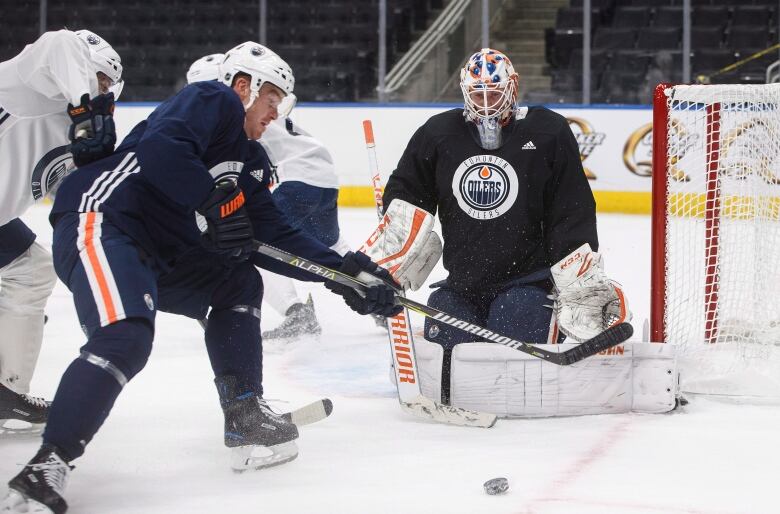 Edmonton Oilers goalie Mikko Koskinen (19) makes the save on Keegan Lowe (47) as the team gathered for training camp on Friday. (Jason Franson/Canadian Press)

“He’s a very cerebral player, economical player … He’s going to get a shot here, too.”

The Oilers are looking for answers as they try to rebound from a disappointing non-playoff campaign, the second in the last three despite having two-time NHL scoring champion McDavid.

There has been criticism of late that having McDavid, the brightest light in the game, absent from the post-season is a disservice not only to the franchise but to the sport.

Chiarelli admitted there is added pressure.

“You want to maximize what you can do when Connor is here and when he’s performing at the level we all expect,” he said.

“We have to meet those expectations, as does the rest of the team.”

The pressure got more intense this week when division rival San Jose traded for top defenceman Karlsson from Ottawa.

Chiarelli said Edmonton was not on Karlsson’s negotiation list and therefore didn’t have a chance to get him, but said the trade stings nonetheless.

“I won’t lie, when he came to our division there was a little bit of an expletive coming out of my mouth,” he said.

Chiarelli has also been questioned for signing backup goalie Mikko Koskinen from the KHL for one year at US$2.5 million to back up Cam Talbot. Chiarelli said the asking price for Koskinen was high because there were other bidders, adding that Koskinen’s backup status is not set in stone.

“We felt we wanted a competition at goaltending,” he said.

“He’s going to get a chance and we hope that he pushes Cam and vice versa.”

The first scrimmage of camp saw Ty Rattie and Ryan Nugent-Hopkins skating on McDavid’s wings. That trio finished strong last season and they’re getting a shot to keep the success going this season.

Rattie, a career journeyman with far more minutes logged on the farm than in the bigs, said he worked harder on conditioning in the off-season to make the most of the opportunity.

“I’ve got to be a shooter. I’ve got to get in the dirty areas and get that puck back for those guys,” said Rattie.

“I have a pretty good understanding of what my role is on that line. Now it’s just a matter of getting it done.”