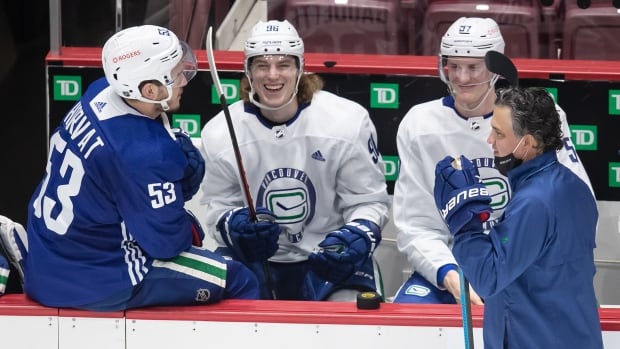 The Vancouver Canucks confirm a variant of the COVID-19 virus is responsible for the outbreak that has ravaged the team.

“As of today, 25 individuals have tested positive and the source infection is confirmed a variant — full genome sequencing by [B.C. Centre for Disease Control] will be required to determine which specific type,” reads the statement from the team.

So far, 21 players and four staff members have tested positive for COVID-19. An additional player is considered a close contact.

Earlier, the chief medical health officer for Vancouver Coastal Health told CBC News that officials had traced how the virus first gained a foothold in the team.

“The cluster at the Vancouver Canucks … we do know how the virus entered that community,” said Dr. Patricia Daly. “We don’t provide details of any cases.”

The Canucks statement said the source is “a single individual obtained in a community setting, which has since been identified by public health as a public exposure location.”

“Rapid spread of infection throughout the team indicates a link between contacts and the primary case.”

Forward Adam Gaudette was the first member of the team to test positive for COVID-19 and was pulled off the ice mid-practice on March 30.

Defenceman Travis Hamonic followed the next day and the NHL postponed the Canucks game against the Calgary Flames that evening.

Five more games have since been postponed as the virus spread among players and staff.

With the team having played just 37 of 56 regular season games, it’s unclear what the remainder of the season will bring.

An NHL spokesperson said “a 56-game season is still the focus” but if necessary, the league has some flexibility on scheduling the opening of playoffs.”

The prolonged layoff while battling the virus could be another blow to Vancouver’s already precarious playoff hopes.

Heading into Wednesday night, the Canucks (16-18-3) trailed Montreal by eight points for the final playoff spot.

“The health and safety of players, staff, families and the greater community remains the utmost priority,” said the Canucks.

“This is a stark reminder of how quickly the virus can spread and its serious impact, even among healthy, young athletes.

All staff and players remain in quarantine, according to the team.