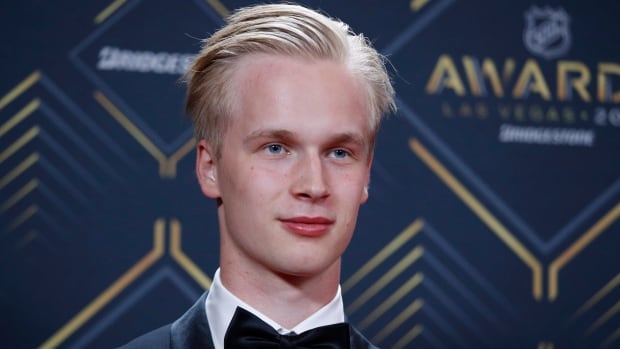 Vancouver Canucks centre Elias Pettersson has won the Calder Trophy at the NHL’s top rookie at the league’s award ceremony.

Pettersson, who scored seven game-winners, became the 31st player in NHL history to end a season leading in goals, assists and points.

Binnington, a native of Richmond Hill, Ont., helped the Blues win the Stanley Cup after making his first career start on Jan. 7, with the team sitting last in the West standings.

Dahlin, the No. 1 overall pick in last year’s draft, led all rookie defencemen with 44 points.

Sweeney has built a consistent winner since the longtime Bruins defenceman took over the front office in 2015. Boston reached the Stanley Cup Final this season, losing in seven games to St. Louis.

Barkov scored a franchise-record 96 points for the Panthers, yet he committed just four minor penalties while playing more than 22 minutes per game. The Finn was a Lady Byng finalist for the third time in four seasons.

Barkov drew a few laughs when he apparently heard a few shouts in Finnish as he took the stage to accept his trophy.

“We have more fans from Finland than Florida here,” Barkov said.