Tomas Nosek scored the go-ahead goal midway through the third period and then added an empty netter as the expansion Vegas Golden Knights defeated the Washington Capitals 6-4 on Monday in Game 1 of the Stanley Cup Final.

Reilly Smith, with a goal and an assist, Colin Miller, William Karlsson and Ryan Reaves also scored for the Knights, who got 24 saves from Marc-Andre Fleury. Deryk Engelland chipped in with two assists.

“I am excited,” Nosek said. “It’s just the first win so three more and I’ll be more excited for sure.”

Braden Holtby made 28 saves for the visitors.

Game 2 goes Wednesday in Sin City before the series switches to Washington for Games 3 and 4.

Nosek’s winner at 9:44 of the final period came after Vegas defenceman Shea Theodore moved down the sideboards and fed the wide-open winger for his second goal of the playoffs.

“I just told myself to focus on the puck and hit it at the right time,” Nosek said of the winning goal. “I expected it [the pass] the whole time, that’s why I moved from the goalie’s eyes to the backdoor, so he [Theodore] could pass it to me.”

The Capitals pressed late with Holtby on the bench, with Lars Eller flubbing on a wide-open net, but were unable to find an equalizer before Nosek sealed it.

Washington went up 4-3 just 70 seconds into the third when Fleury accidentally kicked Wilson’s deflection into his own net for the big winger’s fourth. 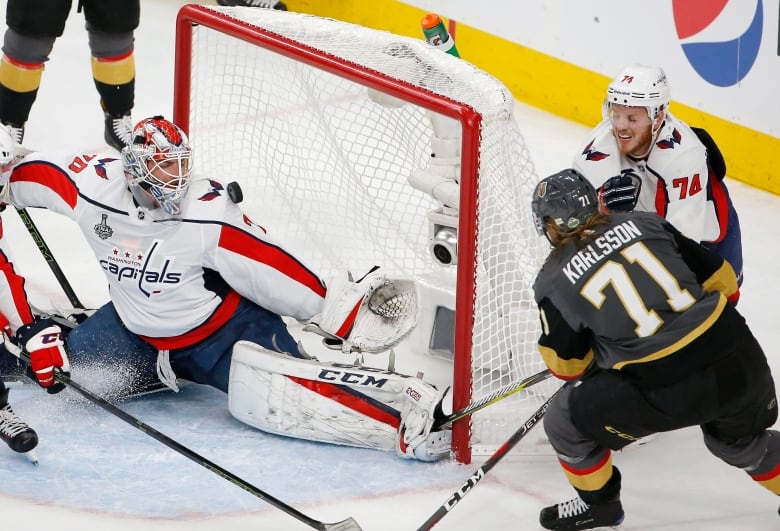 William Karlsson’s shot deflects off Washington goaltender Braden Holtby and into the net in the first period of Game 1 of the Stanley Cup Final on Monday. (Ross D. Franklin/Associated Press)

But Vegas came right back 1:31 later when Reaves, who scored the series clincher in the Western Conference final against the Winnipeg Jets, banged home his second.

Carlson hit his second post of the night a few minutes on Fleury, who entered with a .947 save percentage in the playoffs, before Smith came right back and hit the post at the other end.

Wilson delivered a blindside hit on Jonathan Marchessault with the puck nowhere near the Vegas centre in the immediate aftermath. But the teams played 4 on 4 for the next two minutes, with Wilson getting whistled for interference, while David Perron went off for cross checking in the ensuing scuffle.

Put on a show

Tied 2-2 after a back-and-forth first, Smith swatted home his third of the post-season off an Engelland feed from behind the net at 3:21 of the second with Holtby swimming in his crease after Marchessault grazed the crossbar seconds earlier.

The Capitals responded with Carlson’s fourth at 8:29 after a nice pass from Oshie in the slot left the defenceman with a yawning cage.

Carlson nearly made it 4-3 on a power play later in the period, but Fleury got the shaft of his stick on the puck before it caromed off the part of the net where post meets crossbar. 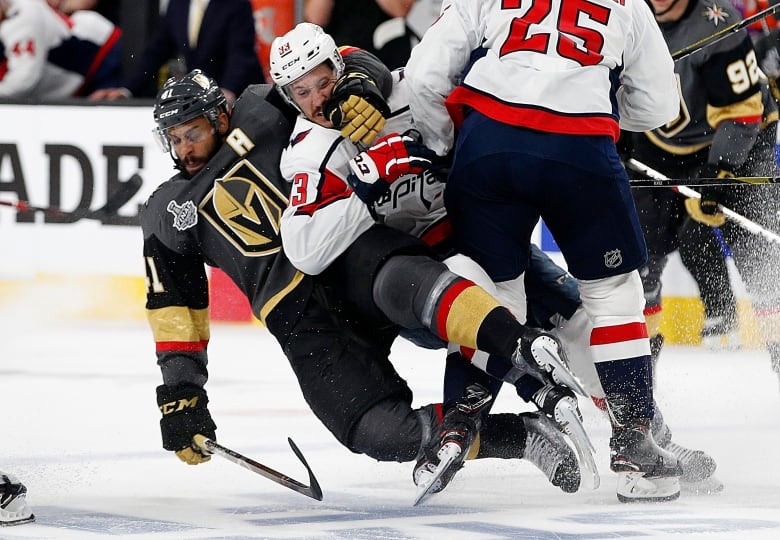 The electric atmosphere around T-Mobile Arena started two hours prior to the late-afternoon start time, with rapper Lil Jon revving up the crowd in a packed plaza outside the rink before a pre-game spectacle on the ice with actors portraying a knight and his archers defeating an invading army — in this case, the Capitals.

Famed ring announcer Michael Buffer then provided his patented “Let’s Get Ready To Rumble!” call prior to introducing the starting lineups.

Buffer, however, struggled with some of the names, and Washington captain Alex Ovechkin seemed annoyed with how long it went on, skating in circles along the blue line to stay warm.

A drum line with flashing lights pumped up the crowd during breaks, while Canadian-born professional fan Cameron Hughes danced and hurled t-shirts into the stands.

The Knights then honoured military veterans in the first intermission, marking Memorial Day with a rendition of “God Bless America” by seven-time Grammy Award-winner Gladys Knight before an abbreviated Cirque de Soleil performance during a TV timeout in the second period.

Vegas opened the scoring at 7:15 of the first period when Miller scored his first of the playoffs with blast from the point on a power play that beat a screened Holtby.

Washington tied it up at 14:14 when Connolly tipped his fifth between his own legs, off Miller’s skate and beyond Fleury.

The Capitals then went ahead for the first time just 42 seconds later when Backstrom, who suffered a hand injury in the second round that forced him to miss four games, scored his fifth.

But Karlsson jammed in his seventh shortside with 1:41 to send the teams to the locker rooms tied 2-2 following a frenetic opening 20 minutes. 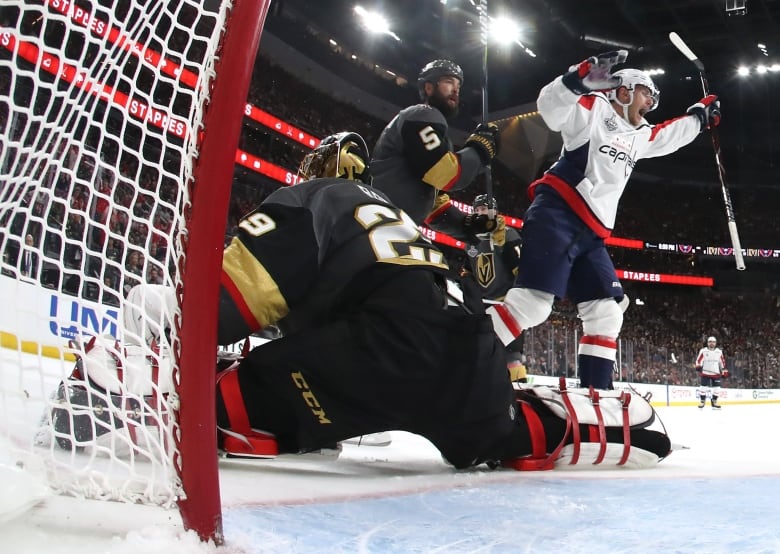 Monday marked the first game for the Capitals in the final since their only other appearance in 1998 when they were swept in four straight by the Detroit Red Wings.

Washington had failed to get beyond the second round of the playoffs in the 20 years since, including Ovechkin’s entire career, before beating the Pittsburgh Penguins earlier this spring to advance to the Eastern Conference final against the Tampa Bay Lightning.

Ovechkin said he was both nervous and calm during his first Stanley Cup Final game.

“Yeah, it was both. I think next game is going to be different,” he said. “A little nervous overall. Just have to forget about it and bounce back [for the] next one.”

The Golden Knights, who beat the Los Angeles Kings, San Jose Sharks and the Jets to improbably advance to the final in a stunning first season, played just their 98th game in franchise history.