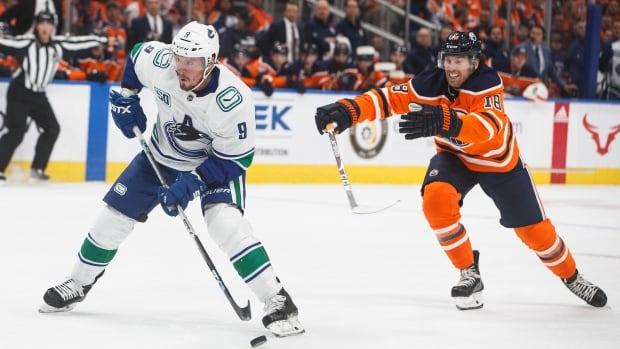 J.T. Miller has a simple philosophy about playing with Elias Pettersson and Brock Boeser on the Vancouver Canucks’ top line.

“They are so gifted with and without the puck, I just try to stay out of their way for the most part,” he said.

“I can learn from him,” said Pettersson, last year’s Calder Trophy winner as the NHL’s top rookie. “He takes care of me. He comes up with a lot of smart stuff.

“Every time we talk about how I want to play we are on the same terms.”

If the Canucks hope to avoid missing the playoffs for a fifth consecutive season, they must muster more offence. Vancouver was 26th in the league last year with just 219 goals.

In five games this year, the Canucks have 18 goals. Playing as a unit for three of those games, Miller, Pettersson and Boeser have produced four goals and six assists at even strength. Maybe not extraordinary, but the Canucks are 3-0 during that stretch.

“It’s fun,” Miller said. “I’ve played up and down the lineup my whole career. I’m comfortable anywhere and make the most out of whoever I’m with.”

A versatile player who can play both centre and wing, Miller scored twice on the power play in Vancouver’s 5-1 win over the Detroit Red Wings Tuesday night at Rogers Arena.

“I’m just pumped the power play clicked tonight,” said Miller, who has three goals and six points heading into Thursday night’s game in St. Louis against the defending Stanley Cup champion Blues. “It’s nice to put the puck in the net but at the same time, we’ve been doing so many good things [on the power play] and we’re getting rewarded for it. That’s more important for me right now.”

Boeser contributed three second-period assists against Detroit while Pettersson had a goal and two assists as Vancouver improved to 3-2-0.

At six-foot-one and 218 pounds, Miller is the biggest player on the line. He has the size to win puck battles and the hockey smarts to dispense advice.

“Our games are different, but I’ve played with some elite players before,” said Miller, who has averaged 20 goals and 51 points over the previous four seasons. “There are some things that I try to instill on them and help them out.

“I can retrieve pucks for them. I think I have enough skill to make plays at their level. They are two really elite players. I just try to get the puck to them when they are open and get to the net.”

Head coach Travis Green describes Miller as “the right fit” for the line.

“He’s a good hockey player,” Green said. “When you are a good player you can play in different situations. He can be physical if needs to and he has a high compete level.”

“He works hard,” Horvat said. “He’s the type of player you can put him with anybody, any line, and he’s going to do well.”

Horvat said Miller adds some denim to the smooth silk of Boeser and Pettersson.

“He drags a lot of guys into the fight,” Horvat said. “Brock and Petey have a lot of skill and he brings that grit and hard work. He complements that line really well.”

Veteran Detroit forward Valtteri Filppula knows what it’s like to play against Miller.

“All around he’s a good player that can score [and] can hit as well,” Filppula said. “You have to be aware of him on the ice.”

Miller — the J.T. stands for Jonathan Tanner — was picked 15th overall by the New York Rangers in the 2011 draft. He spent six full seasons with the Rangers before being traded to the Tampa Bay Lightning in February 2018.

The Canucks acquired Miller in a trade during this year’s draft. General manager Jim Benning sent goalie Marek Mazanec, a third-round pick in the 2019 draft and a conditional first-round pick for 2020 to Tampa Bay.

“It makes me feel like they wanted me,” Miller said. “It’s good to be wanted.

“To see what they gave up made me want to challenge myself moving forward and do well.”

The Canucks opened the season with a pair of losses. The three consecutive wins matches Vancouver’s longest win streak of last year.

“We have a lot of new faces,” Miller said. “I know the guys are probably looking more forward to what we can do this year than looking back on last year.