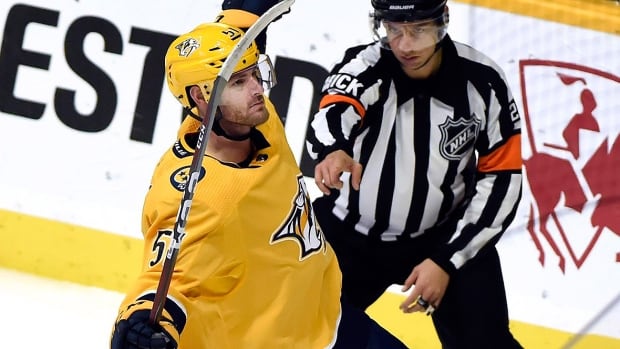 Nashville Predators forward Austin Watson is returning to the lineup for the first time since he was suspended by the NHL more than two months ago for alcohol abuse.

Head coach Peter Laviolette announced Watson will play in Nashville’s game Tuesday night in Buffalo. The decision comes two days after Watson was recalled from the minors, where he scored four goals in two games with AHL Milwaukee.

Watson has missed 27 games since being suspended on Jan. 29. The native of Ann Arbor, Mich., entered the second stage of the league’s substance abuse and behavioural health program because of what the NHL and the players’ union described as “ongoing issues with alcohol abuse.”

Watson began the season serving an 18-game suspension after pleading no contest to a domestic assault charge in July. His girlfriend issued a statement in October taking blame for the incident in the parking lot of a gas station.

Watson has seven goals and 13 points in 34 games this season with Nashville.

The Predators have three games remaining and entered the final week of the regular season in a three-way race to win the Central Division title.