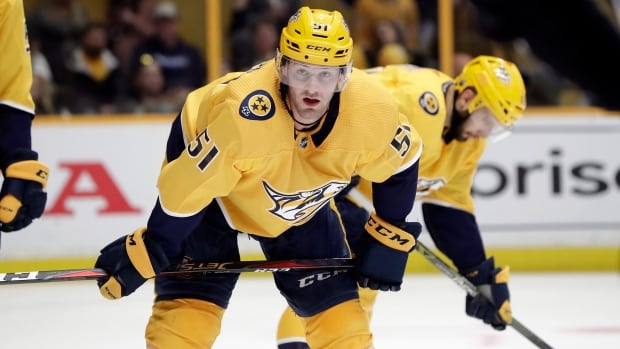 Austin Watson’s girlfriend is taking blame for the incident that led the NHL to suspend the Nashville Predators’ forward for 27 games, a punishment reduced to 18 games by an arbitrator on appeal.

Jenn Guardino issued a statement Saturday said the incident on June 16 “was not an act of domestic violence” because she was intoxicated and that Watson has never and would never hit her. She says she has struggled with alcoholism for years and is currently in Alcoholics Anonymous. She says they handled that situation poorly in June.

She thanked Watson for supporting her treatment. Guardino also apologized to everyone involved, including the Predators and the city of Nashville.

Watson was arrested June 16 after a witness flagged down a police officer to a gas station in Franklin, Tennessee. Watson told police he and his girlfriend were arguing and that he pushed her. Officers said they found red marks on her chest, and she said Watson caused them. Watson pleaded no contest to domestic assault on July 24.

He can have the misdemeanour charge dismissed by fulfilling terms of his judicial diversion program. Watson must serve three months of probation and complete both an in-patient treatment program and a batterer’s intervention program.

The NHL suspended Watson on Sept. 12 for 28 games, and both the league and the NHL Players’ Association announced Thursday that arbitrator Shyam Das had reduced it to 18 games.