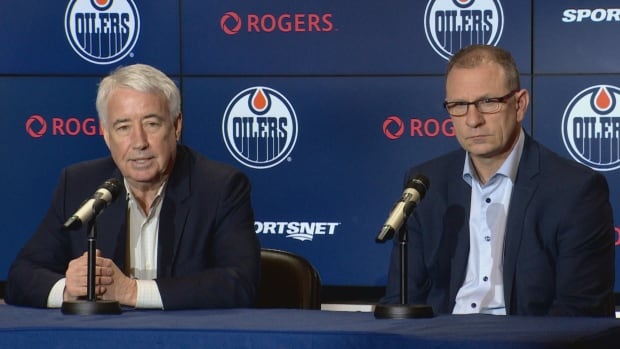 Edmonton Oilers CEO Bob Nicholson is getting a second crack at finding someone who can steer his club back into the NHL playoffs.

One candidate, interim GM Keith Gretzky, was right beside him Monday morning as Nicholson faced the media about where he’s at on finding the team its next general manager.

“I really like the job Keith has done in the interim,” said Nicholson. “There’s Wayne Gretzky and there’s Keith Gretzky and Keith has built his own resume.”

Nicholson said there are several other candidates he plans to start interviewing soon.

“I’d like to hire the general manager tomorrow, but that’s not going to happen,” he said. “I’m not going to rush the process. We’re going to do a deep dive.”

Even though Gretzky has held the interim position since Peter Chiarelli was fired Jan. 22, it doesn’t guarantee him a spot at the top of the list of candidates, Nicholson said.

“First of all, I do want to be the GM,” said Gretzky who has held the assistant general manager title for the last three years.

“There are lots of candidates … and you have to accept the process and move forward. Right now it’s about the team. We have to get ready for the draft then we’ll discuss it after the draft.”

Criticism of Nicholson and the management team has been unrelenting this year, from the Oilers faithful to the team’s own captain.

Nicholson admits the organization has to re-evaluate how it operates.

“There’s a lot of perceptions out there about what’s going on here, some of them correct and a lot aren’t correct,” Nicholson said.

“It’s time for us to put our work boots on and get it right. There’s a lot to do and the first step will be getting a new general manager.”

McDavid suffered what he thought was a broken leg Saturday night against the Calgary Flames.

X-rays came back negative and McDavid was able to walk into the dressing room Sunday without crutches. He underwent an MRI Sunday.

“We can’t get too far into it,” Nicholson said. “We’re still evaluating it but it’s not as serious as we thought. But hey, it’s Connor, it’s an injury, it’s serious for our organization.”

Nicholson and Gretzky are leaving for Toronto for the NHL draft lottery Tuesday, where Edmonton, unfortunately, has plenty of expertise.

Edmonton has a 6.5 per cent chance to move up six spots for the first pick overall.

In 2015, the Oilers vaulted from third spot to first, allowing the team to select McDavid.