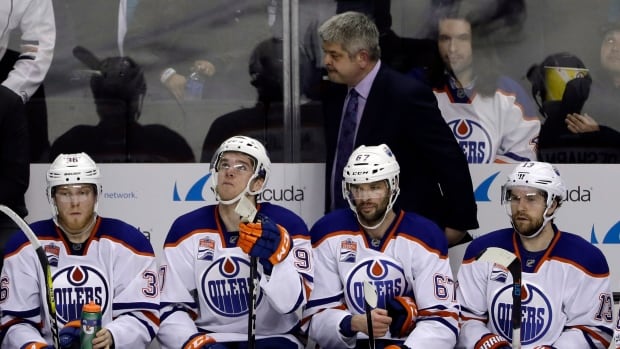 Head coach Todd McLellan, with his Edmonton Oilers coming off an embarrassing season, says the first order of training camp is demanding specific answers to one existential question.

“Who are we?” McLellan said Thursday as the Oilers opened training camp at Rogers Place with medicals and physical tests.

Are they the Oilers who came within one game of hockey’s final four two years ago? Or are they the group that got complacent last season, plummeted down the standings and missed the playoffs?

McLellan said there would be a meeting with players before they hit the ice Friday to get answers — and nobody gets a free pass.

“Even if you had a great year, who are you and what are you bringing to the table?” said McLellan.

“That has started with us as a (coaching staff) … but it has to get into the players’ minds: Which group do we want to be?”

The roster is essentially the same as general manager Peter Chiarelli, bumping up against the salary cap, nibbled around the edges in the off-season by signing veterans like Kyle Brodziak and Tobias Rieder to round out the bottom six forwards and fix the penalty kill.

‘Saw Winnipeg do it’

“You saw Winnipeg do it,” said McDavid.

“They weren’t very good two years ago and last year you saw what they are able to do (make the final four).”

“We know where things went wrong (last year) and you’ve got to learn from that.”

Winger Ryan Nugent-Hopkins said, “It’s a pretty serious attitude right now. We’ve been skating together for a week and a half.

“We’ve been battling, and the scrimmages are high intensity and good pace.

“We can learn from last year. We need to or we’re not going to make that jump forward, and I think everyone has learned.”

The Oilers have multiple questions to answer in camp before they fly to Europe to open the regular season against the New Jersey Devils in Gothenburg, Sweden on Oct. 6.

Job one is fixing the special teams. The power play was dead last in the league and the penalty kill was 25th last year. New assistant coaches Glen Gulutzan, Trent Yawney and Manny Viveiros are being counted on to do that.

The defence struggled last year and fresh problems have since emerged. The Oilers’ top puck-moving D-man, Andrej Sekera, is out indefinitely with a torn Achilles tendon and Darnell Nurse is not in camp while he and the team try to agree on new contract.

McLellan said that means expectations are higher on first-line defencemen Oscar Klefbom and Adam Larsson along with veterans Matt Benning and Kris Russell.

The main story with the forward ranks is who will skate with McDavid. Those jobs have tended to be on a merry go round. Nugent-Hopkins and journeyman forward Ty Rattie played well with McDavid late last season and will be the top trio going into camp.

Other questions surround whether 31-year old goaltender Cam Talbot can shake off a subpar year (3.02 GAA, .908 save percentage) and return to his outstanding form of 2016-17. The Oilers have brought in Mikko Koskinen from the KHL to back him up.

Up front, will Jesse Puljujarvi have the much-anticipated breakout season? Will Kailer Yamamoto, who impressed coming out of junior last year, stick with a team that needs immediate help on the right wing?

Leon Draisaitl has shown he can be a dominant centre, but can he do it night in and night out? Who will step up to score on a team where McDavid was first last year with 108 points, and second was Draisaitl, 38 points back?

There’s also the question of whether the Sekera/Nurse issue will force the Oilers to keep top draft pick Evan Bouchard in the bigs? Bouchard is caught in the middle ground, considered too good to go back to junior but perhaps not ready for the NHL.

Then there’s big-ticket veteran winger Milan Lucic. At age 30, can he bounce back from a miserable season (10 goals, 34 points)?