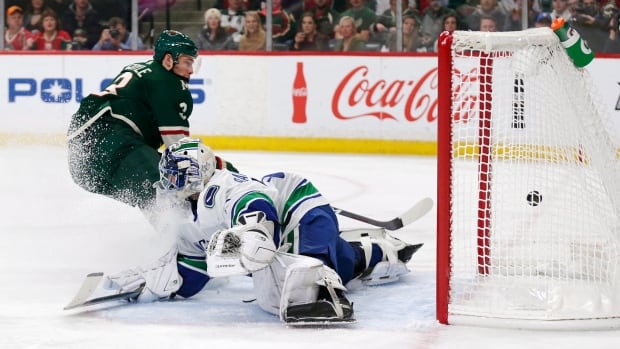 Mikko Koivu had a goal and two assists, and the surging Minnesota Wild beat the road-weary Vancouver Canucks 6-2 on Thursday night.

Eric Staal had a goal and an assist, and Charlie Coyle, Nino Niederreiter, Matt Dumba and Jason Zucker also scored for the Wild, who had a season high in goals. Ryan Suter had two assists, and Devan Dubnyk made 25 saves. Minnesota has won four of five and 11 of 14.

Bo Horvat and Markus Granlund scored for Vancouver, which lost three straight in regulation to conclude its second six-game road trip of the season. The Canucks have played a league-high 14 road games, double its number of home contests.

Koivu scored one of the easiest goals of his 14-year career on the power play to make it 2-0 less than eight minutes into the game. Canucks goalie Richard Bachman passed from behind his net directly to Koivu feet from an empty net.

The goal came just over two minutes after the Wild captain assisted on Minnesota’s opening tally by Coyle.

Koivu has 10 points, including two goals, in his last six games.

Bachman, who played last season and the start of this season with AHL Utica, was in goal for Vancouver for the first time since April 9, 2017. He made 23 saves.

Jacob Markstrom started the nine previous games, Anders Nilsson remains out with a fractured finger and top prospect Thatcher Demko is out with post-concussion symptoms. Nilsson took some shots during morning skate but has not been medically cleared to play.

With Vancouver’s spotty defence, Bachman was forced to make sprawling saves, and a couple other pucks trickled just wide, especially late in the first.

On the power play, Niederreiter redirected Koivu’s pass 1:46 into the second for a 3-0 lead.

Horvat got the Canucks within 3-1 with a power-play goal later in the period, but Staal scored on a wraparound 36 seconds later to restore the three-goal lead.

Dumba’s shot from the blue line beat a screened Bachman late in the period. It was his seventh goal of the season, one behind Toronto’s Morgan Rielly for the league high by a defenceman.