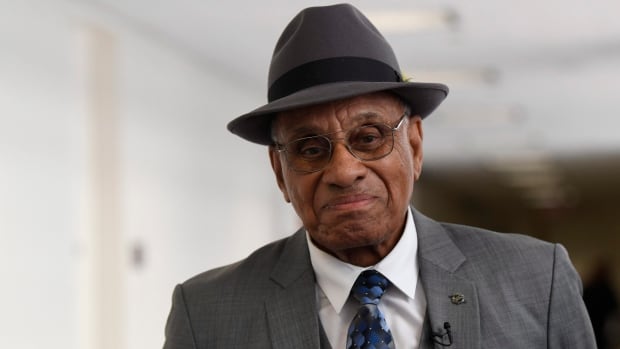 The first black man to play in the NHL in 1958 is distressed by both the death of a black man under the knee of a white policeman, and subsequent violent confrontations between police and protesters erupting across the United States.

“I’m 84 years old and didn’t think I’d witness some of the stuff that’s going on, but this dates back to the slavery age,” O’Ree told The Canadian Press.

George Floyd was killed May 25 when a white Minneapolis police officer pressed a knee into the 46-year-old black man’s neck for nearly nine minutes.

The video of his death circulating widely on social media fuelled protests that have been met with police force in some U.S. cities.

“It’s just a tragedy that every time an unarmed black man is killed there’s really nothing done about it at that particular time,” O’Ree said.

“It’s like you’re here today and gone tomorrow. Your life is just snuffed.”

Fredericton’s O’Ree broke the NHL’s colour barrier Jan. 18, 1958 with the Boston Bruins. He played 45 career games for the club.

Now living in San Diego, O’Ree has been the NHL’s diversity ambassador for over two decades.

‘It’s not going to stop overnight’

O’Ree is also the NHL’s director of youth development under the Hockey Is For Everyone banner.

“I experienced it when I was playing and a lot of these boys and girls I come in contact with the Hockey Is For Everyone program, they’ve had racial remarks directed towards them on the ice, on the bench or in the dressing room.

“I think it’s just terrible you just can’t look at a person for who they are and forget about the colour of their skin.”

Akim Aliu’s revelations last year about racist remarks directed at him in the minor leagues by future NHL head coach Bill Peters held a mirror up to hockey.

NHL players have traditionally been reluctant to comment on political and social issues, but several are weighing in now on racism and injustice via social and traditional media.

Players such as Connor McDavid and Gabriel Landeskog have written about coming to grips with white privilege in their social-media posts.

WATCH | Blake Wheeler speaks about death of George Floyd in his hometown:

During a 40-minute conference call with reporters on Tuesday, Winnipeg Jets captain Blake Wheeler spoke about the death of George Floyd in police custody in Minneapolis. 39:52

Winnipeg Jets captain Blake Wheeler told reporters Tuesday “we have to be as involved in this as black athletes. It can’t just be their fight.”

“I wish that it didn’t take me this long to get behind it in a meaningful way.”

‘Silence is not an option’

Bruins forward Patrice Bergeron wrote “silence is not an option for me anymore.”

“As hockey players, we have a tendency to do our business while staying quiet, without wanting to make too much noise,” Bergeron said.

“But surrounding the murder of George Floyd and the protests that followed, it made me realize that by not speaking up on the matter, and not using my voice as a professional athlete, it’s in fact allowing racism to fester and continue.”

O’Ree hopes those acknowledgements translate into meaningful action among NHL players when the league emerges from its COVID-19 hiatus.

“Maybe they’re starting to realize what’s been going on and what’s been happening, not only to black players, but players of colour,” O’Ree said.