As curtain-raisers go, the Winnipeg Jets played well enough to produce a positive 5-1 victory against the Blues in St. Louis on Thursday evening.

The result was certainly a better start than the back-to-back losses a year ago, a 7-2 drubbing at home by the Toronto Maple Leafs and a 6-3 road defeat to the Calgary Flames three nights later.

But this is a much different time for the Jets, a trendy pick among prognosticators to win the Stanley Cup.

The heat is on.

Expectations are sky high after the Jets took their loyal fanbase on an incredible flight to the West final five months ago.

The Winnipeg Jets scored four goals in the third period, as they beat the St. Louis Blues 5-1 to open their season. 1:39

Still, despite the good vibrations that were spawned last spring, there were questions entering the season. How much would they miss second-line centre Paul Stastny, who left via free agency to sign with the Vegas Golden Knights, the team that beat the Jets in the conference final?

There are 81 more games and the postseason before we’ll know all the answers to these questions. But we do know this game gives you nothing the season after a good one.

‘The ups-and-downs of hockey’

Just ask the Pittsburgh Penguins, Nashville Predators, Anaheim Ducks and Ottawa Senators. The Penguins defeated Nashville in the 2017 Stanley Cup final after the Predators eliminated Anaheim in the West final and the Penguins required a Chris Kunitz double-overtime goal to oust the Senators in Game 7 of the East final.

Last year, Ottawa couldn’t even make the playoffs and the Ducks were swept in the first round by the San Jose Sharks. The Penguins and Predators failed to advance past the second round.

Jets coach Paul Maurice is well aware of the ups-and-downs of hockey. 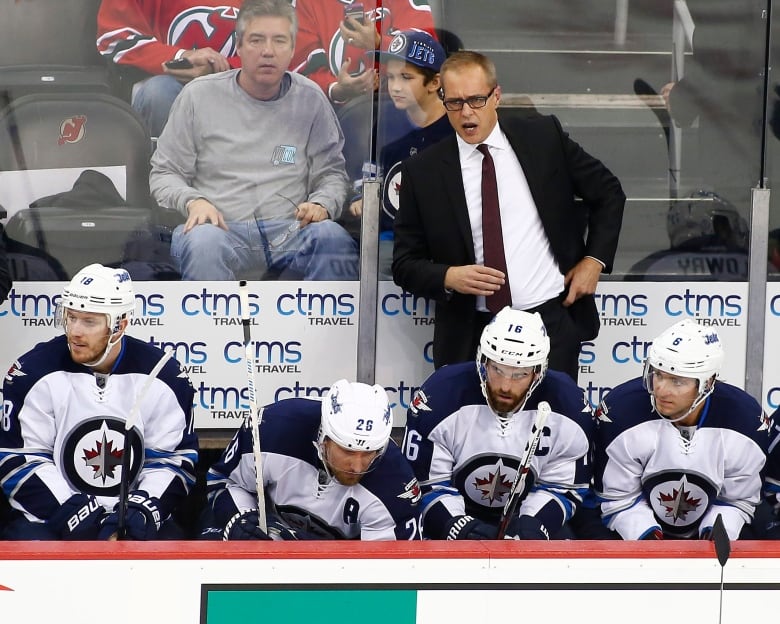 So among his messages 138 days ago in his post-elimination news conference, after the Golden Knights edged Winnipeg 2-1 in Game 5 of the West final, he told reporters that his players had to start again this fall.

“There is nothing permanent and nothing given and your season prior doesn’t guarantee you anything the next year,” the bespectacled coach said.

“You have to get comfortable that you’re starting at ground zero with everybody else and the fact that you can miss, you can also win.”

Win is what Maurice’s side did against the Blues.

Winnipeg snatched an early 1-0 lead on the power play thanks to a pinpoint shot from a relieved Laine, who failed to score a goal in the preseason.

After Laine’s goal, the Jets exhibited patience, went four-for-four on the penalty kill and pounced on their opportunities in the third period for four goals in five minutes and 14 seconds to increase their lead to 5-0.

Hellebuyck allowed his teammates to be patient with a strong 41-save game. 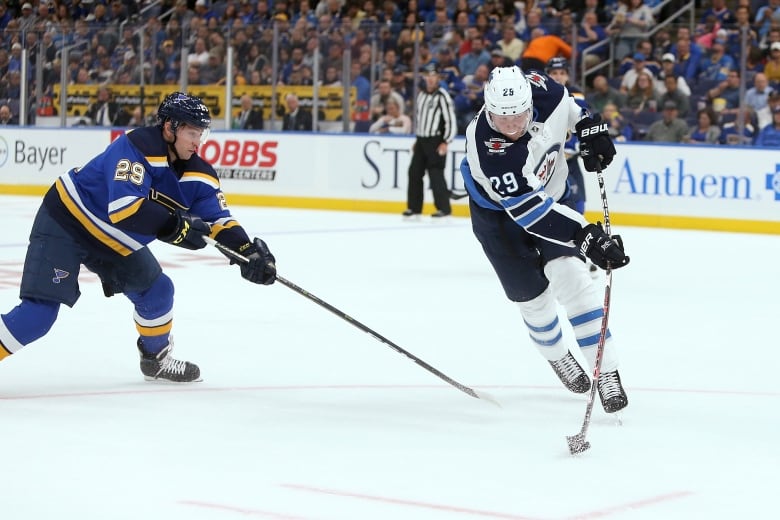 The game turned in the Jets favour in the third period with the Blues on the power play. Hellebuyck kept the score 1-0 with a nice stop on Winnipeg-born and Blues veteran Alex Steen.

“It’s a spark, right,” Maurice said of Hellebuyck’s save on Steen.

“When you get a guy playing that kind of game it inspires you to push a little harder.”

“There were some really impressive things. He got across his crease so strong. It seems like a continuation of things he did last year.”

Hellebuyck was the bright spot. 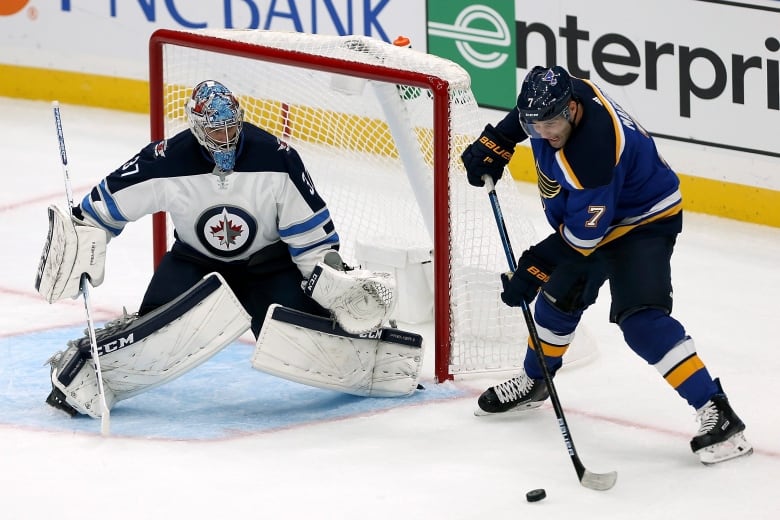 But other good developments were the Jets speed and transition game was in gear and five different Jets scored. Depth is one of the Jets strengths.

Take a look at the effective play of Winnipeg’s third and fourth lines.

Lowry, born in St. Louis when his father Dave was a Blues forward, enjoyed a strong game, especially on the penalty kill as did his linemate Brandon Tanev, who without a stick, blocked a blast from St. Louis captain Alex Pietrangelo prior to Hellebuyck’s big stop on Steen.

It also should be mentioned that 19-year-old rookie Kristian Vesalainen picked up an assist for his first NHL point in his first game on the Jets final goal from Tanev.

Sure the Jets could have been better defensively in this one. But for a curtain-raiser, it was a pretty good start.