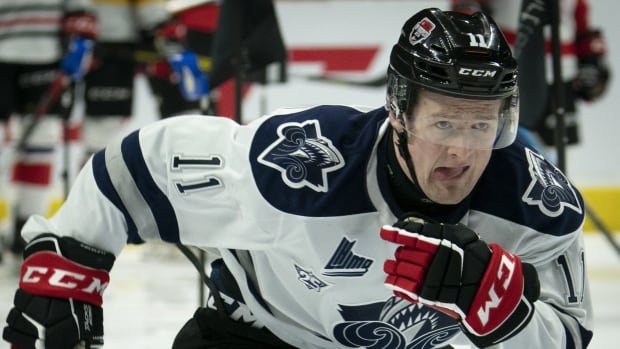 Alexis Lafreniere could never have envisioned ending his prolific junior hockey career in such an anticlimactic setting.

There was no final buzzer, and the NHL’s projected top draft prospect was nowhere near an ice rink Wednesday. Lafreniere was instead sitting at home in suburban Montreal as he opened a conference call with reporters by thanking his Rimouski Oceanic teammates, coaches and fans for their support over the past three years.

Whatever chance of completing his Quebec Major Junior League season or competing in the playoffs for a shot at reaching the Memorial Cup tournament were wiped out this week following Canadian Junior Hockey’s decision to cancel play because of the coronavirus pandemic.

“For sure it was tough news for me and all the team,” the 18-year-old left-winger said.

“I think we had a great team this year and we believed that we could do something special for sure,” Lafreniere added. “It’s a little bit sad. But we have to make sure that everyone is doing their best staying healthy.”

The uncertainty will continue over the coming months, with there being no clear indication of how the pandemic will affect the timing of the draft which the NHL announced was being postponed instead of happening in Montreal in late June.

That weekend was long expected to be Lafreniere’s coming-out party, given that he’s from Saint-Eustache, a half-hour drive from the site of the draft, the Canadiens’ Bell Centre.

With the NHL season postponed indefinitely, and the likelihood growing that play won’t resume until this summer, there’s a chance the draft will be conducted by phone without the usual spectacle of players taking the stage in front of a packed arena.

“For sure if the draft is online, it’s going to be different for us,” Lafreniere said. “But we’re still going to enjoy our time and still be happy there.”

An Oceanic player, Sidney Crosby, was selected first by Pittsburgh in 2005, the last time the draft wasn’t open to the public after the 2004-05 season was wiped out by the NHL lockout.

At 6-foot-1 and 200 pounds, Lafreniere has consistently topped the NHL scouting bureau’s list of draft-eligible prospects.

Overall, Lafreniere has 114 goals and 183 assists for 297 points in 173 games. In January, he captained Canada’s gold-medal-winning team and earned MVP honours at the world junior championships.

For now, his performance in the world tournament, where he had five goals and five assists despite missing two games with a knee injury, will stand as Lafreniere’s defining moment, and coming a year after Canada was eliminated in the quarterfinal round.

“Growing up you dream about it,” he said. “To come back this year and to be able to win that, I think for sure it was a big moment for my career so far.”

Much like the NHL season, the pandemic has placed the draft process into limbo. It’s unclear when the annual draft lottery, usually scheduled in mid-April, will take place or whether changes will be made in determining the draft order.

In the past, the draft order among the 15 non-playoff teams was determined by lottery balls, with the team with the worst record receiving the best odds to win the top pick.

Though the season is incomplete, the Detroit Red Wings had already assured themselves of finishing 31st with a 17-49-5 record and 39 points, 23 behind Ottawa. Only six points separate Ottawa and Buffalo, which sits 25th.

Lafreniere welcomed the possibilities when asked specifically of playing in Detroit or Ottawa.

For now, he’s doing the best to stay in shape by working out at home.

If there’s one benefit from his season being cancelled is the chance to spend more time with his family — something Lafreniere has not been able to do given his previously demanding hockey schedule.

“It’s easier for sure that I’m with them, and I’m home,” Lafreniere said. “And I can stay here to wait until everything’s done.”