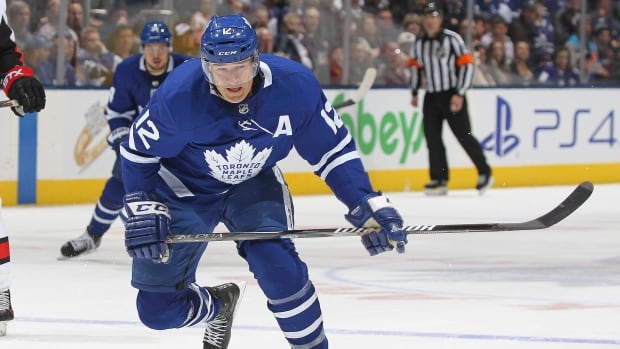 Patrick Marleau concedes sometimes it’s strange to be back in the San Jose Sharks’ locker room.

And then there are moments when it feels like the veteran winger never left.

Speaking with reporters Tuesday morning, Marleau was playfully interrupted by teammate Joe Thornton, who sits just to his right. Newly-anointed Sharks captain Logan Couture, meanwhile, is set up on his left.

After two seasons with the Toronto Maple Leafs — a 24-month stint following nearly two decades in San Jose — Marleau is back where he truly belongs.

“It’s been great,” the 40-year-old said of his return to the Sharks after signing a one-year deal for the league minimum on Oct. 9. “A little bit weird, but at the same time it’s comfortable … it’s just getting back into the swing of things.”

Marleau left the Sharks to sign with the Leafs in unrestricted free agency in July 2017, inking a three-year, $18.75-million US contract.

The move was a shocker for a soft-spoken player that had shied away from the limelight most of his career.

Marner, Matthews under his wing

Marleau played well in his first season with the Leafs, putting up 27 goals and 47 points, and perhaps even more importantly, provided guidance to Auston Matthews and Mitch Marner.

Marleau, his wife Christina and their four sons welcomed the young stars into their family circle. The shared dinners, celebrated holidays and went on excursions.

Matthews and Marner were almost like their fifth and sixth kids.

“It just kind of happened organically,” said Marleau, who will make his return to Toronto on Friday when the Sharks visit Scotiabank Arena. “They were just great players and great people. It was just easy to get a long with them and easy to be friends.”

Fresh off signing a one-year deal on Tuesday, Patrick Marleau tipped home an Erik Karlsson point shot to recorded his first of two goals in his first game with his former club. 0:47

But the No. 2 pick at the 1997 NHL draft could see the gathering clouds on the horizon. Marleau’s 37 points in 2018-19 was his lowest output since his rookie year, and he seemed to have lost a step, especially in the first-round playoff series that saw the Leafs bounced by the Boston Bruins for a second consecutive spring.

With a salary cap crunch coming and Matthews having already signed his lucrative extension, Marleau was an obvious target to be slashed as general manager Kyle Dubas looked to make room for Marner’s impending big-money contract.

The only problem from Toronto’s perspective was that Marleau held all the cards with a full no-movement clause and he wasn’t eligible to have his contract bought out by the Leafs.

Marleau also knew what made the most sense.

“There’s a business side of things,” Marleau said Tuesday before the Sharks took on the Buffalo Sabres. “There were a few things juggling in the air.”

‘No better person to do it for’

The Leafs approached him about the possibility of a trade. He eventually agreed, with Toronto adding a first-round pick as a sweetener to Carolina for the Hurricanes to take Marleau’s contract off their hands.

“You see it almost every year where teams are trying to get everybody that they want underneath the cap,” he said. “It’s always there.”

The irony of it all was that Marner — who would eventually sign a contract with Toronto worth nearly $10.9 million over each of the next six seasons — turned out to be one of the main reasons he was shown the door.

“No better person to do it for, that’s for sure,” Marleau deadpanned. “That makes it easy. [Marner and Matthews] are great people, great players. They deserve every penny they get.”

The Aneroid, Sask., native never had any real interest in playing for Carolina and was bought out by the Hurricanes five days after the trade was completed.

Marleau’s heart was set on a return to San Jose, but the team had already made commitments to other players. Injuries, suspensions and a so-so start to the schedule opened the door.

“In this business your word is very important,” Sharks GM Doug Wilson said. “Some guys had signed contracts to come over from Europe. Patty and his agent fully understood that commitment, but we said if we were going to add a veteran, Patty would be the guy.

“It worked out the way it was supposed to.”

That doesn’t mean there weren’t some uneasy moments for Marleau, who missed his first training camp in 22 NHL seasons.

Marleau’s return to Toronto on Friday will also mark his eye-popping 1,500th game with San Jose.

He keeps a close eye on Marner, Matthews and the Leafs, and sees a bright future for a talented team looking to find its footing.

Marleau just won’t be there to help pull on the rope.

“They have all the pieces up front,” he said. “The core people that they have there is intact. They’re going to be great for a long time.

“It’ll be exciting to see those guys.”