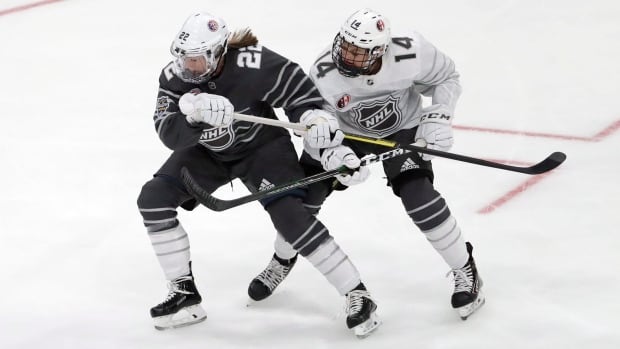 “Launching our first team in Canada is a pivotal and proud moment for the NWHL,” league founder and commissioner Dani Rylan said in statement announcing a new franchise in Toronto.

“Everyone in the Toronto hockey community can be sure that this first-class team of professionals will make bold strides for the women’s game.”

The moment is no doubt a proud one for the NWHL. But whether it’s a pivotal one for the future of women’s hockey is yet to be determined.

Missing from Wednesday’s announcement was an endorsement from the National Hockey League or comment from the Toronto Maple Leafs. There were no words of support from the likes of Hayley Wickenheiser, Danielle Goyette or Vicky Sunohara.

Also missing: a commitment to play from any of the current players on the Canadian or U.S. national teams, who are members of the Professional Women’s Hockey Players’ Association (PWHPA).

“It’s great there’s going to be some women who can play hockey in Toronto because of this expansion,” Jayna Hefford, head of the PWHPA, told CBC Sports. “But we have a different vision of how the women’s game can be sustainable going forward.

“Everything we’re doing is about our current players, but it’s also about five- or six-year-old girls who are playing now and their future.”

At issue is the definition of professional hockey. Founded in 2015, the NWHL became North America’s first pro women’s league to pay its players a salary. There are currently teams in Boston; Monmouth Junction, N.J.; Danbury, Conn.; Buffalo, N.Y.; and Saint Paul, Minn.

The rival Canadian Women’s Hockey League folded last year after 12 seasons due to financial instability. The PWHPA was formed after the league dissolved in an attempt to create better working conditions for players.

The NWHL does not reveal its financial numbers or player salaries, with some making as much as $15,000 US last season. The league also introduced a plan to share 50 per cent of revenue generated from sponsorship and media deals on top of player salaries.

“I don’t know if it’s professional,” Team Canada forward Marie-Philip Poulin told CBC Sports’ Andi Petrillo on the CBC Olympics Instagram channel. “I think there’s a reason why many of us are not playing in that league.”

Team Canada captain believes little girls should dream of playing in a league that the PWHPA envisions. 2:15

Hefford envisions a day when the top players in the world earn enough to pay for rent, food and other routine expenses.

“We want a living wage,” she said. “The women know they’re not going to make millions of dollars. It’s not about that.

“It’s about infrastructure, facilities for day-time training, full-time coaching staff, insurance, and other things. An office, marketing resources, ticketing departments — these things are critical to the survival of any league.”

Prior to her November induction into the Hockey Hall of Fame, Hayley Wickenheiser predicted a bright future for women’s hockey that would include all those things.

“I think the NHL has a plan moving forward,” said Wickenheiser. “If women’s pro hockey is going to happen, it’s going to have to be with NHL involvement.

“I see it as possible: four to six teams probably based in the eastern part of Canada and in the U.S., just for money and geography. And I think it’ll happen. I actually think it will happen within the next year or two.”

The NHL continues to signal its intention to support, build and back the women’s game. Remember that female players wore the NHL logo on front of their jerseys in the elite 3-on-3 event at the 2020 NHL All-Star Weekend in St. Louis. The stage was massive, and the response was overwhelmingly positive.

That’s not a casual move on behalf of the NHL. It’s a public statement of intention.

Given the uncertainty surrounding the COVID-19 pandemic, women’s hockey will no doubt move to the backburner of NHL priorities. That’s understandable. Until there are fans in the seats and packed arenas, the NHL must focus on its core business before branching out.

But there’s no sign a further delay will deter the top players on the planet from their resolve to get it right.

“We’re trying to give young girls a league that they can play in that’s viable and sustainable,” Team Canada defenceman Meaghan Mikkelson told the CBC Sports’ Signa Butler. “We’ve always had to play in really small rinks.  We haven’t had the advertising and marketing means that that we’ve needed.

“It’s taking time. We’re all having to be very patient with it. But in the end, I think it will be worth it.”