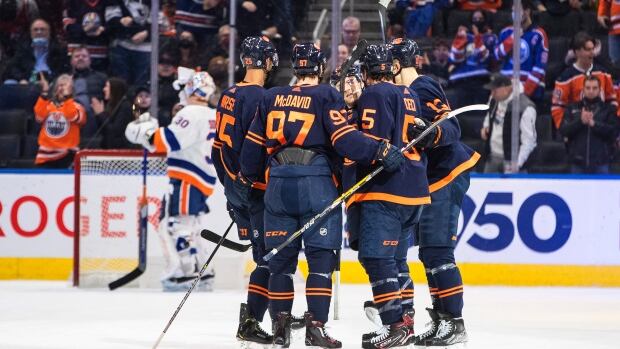 Connor McDavid had a pair of assists as the Edmonton Oilers got new head coach Jay Woodcroft his first NHL win, defeating the New York Islanders 3-1 on Friday.

Cody Ceci, Zach Hyman and Jesse Puljujarvi scored for the Oilers (24-18-3) who snapped a two-game losing skid to improve to 6-2-1 in their last nine outings. Oilers goalie Mike Smith was dynamic in net, making 37 saves.

Anthony Beauvillier replied for the Islanders (17-18-6) who have lost four of their last six.

After Smith stood on his head in the Oilers net to start the game with 18 saves, Edmonton scored a rare first goal of the game when Ceci beat Islanders starter Ilya Sorokin with a long point blast with 57 seconds to play in the opening period. It was just the sixth time in the last 36 games that Edmonton got the game’s first goal. The Oilers came into the contest with a perfect 12-0 record this season when scoring the initial goal.

Edmonton made it 2-0 midway through the second period when Hyman elected to shoot on a two-on-one opportunity and recorded his 14th goal of the campaign and 100th of his career.

New York got back into the contest on the power play with five minutes to play in the middle frame as Beauvillier beat Smith glove-side.

The Oilers restored their lead on the power play midway through the third as Puljujarvi dove for a puck and swatted it through Sorokin’s legs. His 11th ended a 14-game goalless drought.

The Islanders are right back at it on Saturday in Calgary while the Oilers are off until Monday, when they face the Sharks in San Jose.