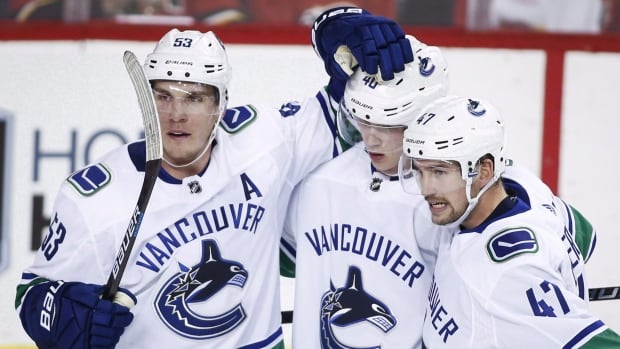 Young stars are blazing a new trail for the Vancouver Canucks and defying the flagging expectations that loomed over the team heading into the season.

Fifteen games into the 2018-19 campaign, the Canucks (9-6-0) have chalked up wins against tough teams like Tampa Bay and Pittsburgh and climbed to second in the Pacific Division.

“We have a lot of guys in here that want to win and want to prove people wrong,” said Bo Horvat, the team’s 23-year-old first-line centre. “Everybody wants to prove that we can be a good hockey team that can step up and compete with anybody. And I think we’ve been doing that so far.”

The Canucks finished second-last in the Pacific last season, out of the playoff race for the third year in a row. They also lost veteran superstars Henrik and Daniel Sedin, who retired at the end of the year following 17 seasons in Vancouver.

The team signed free agents Jay Beagle, Tim Schaller and Antoine Roussel in the off-season, but questions lingered about where the Canucks scoring would come from.

So far, the squad’s top five scorers are all 25 or younger. Rookie Elias Pettersson leads the pack with nine goals and six assists over nine games.

The 19-year-old Swedish centre was named the NHL’s second star for last week based in part on his eye-popping five-point performance in Vancouver’s 7-6 overtime win over the Colorado Avalanche on Friday. He’s now the youngest player in Canucks history to record five-plus points in a regular-season game.

Pettersson was also named the league’s top rookie for October despite missing two weeks with a concussion.

But Pettersson said the team still has what it takes to get wins.

“I think if everyone is heading to the same goal and everyone is focused to do what they can bring to the team and do that every game, good things will happen,” he said.

Vancouver is currently tied for third in the league in wins, behind only the Nashville Predators and the Lightning.

“Obviously it surprised a lot of people out there,” said 21-year-old right-winger Brock Boeser. “But it just goes to show the trust of the guys within this room. We all believe in each other and it’s that next-man-up mentality. And we don’t quit. It’s fun to watch.”

Canucks head coach Travis Green said he likes the way his players are buying into a team mentality.

“No one is bigger than the team. Every guy in the room plays to win. And when you do that, good things happen,” he said. “Individually you bring your best, but collectively you win and lose as a team.”

Feeling the love from fans

Fans are buying in, too. A crowd of more than 18,000 at Rogers Arena on Friday was raucous, an atmosphere that Vancouver hasn’t seen much in recent years.

“You can sense that people are excited about a lot of our young guys and the way that they’re competing,” Green said. “When you feel that [from the crowd] at the end of a game or when you score a goal, that’s why you play the game. It’s a privilege to play in the NHL. It’s extremely special.”

The Canucks will look to build on a three-game win streak as they start a six-game road trip Tuesday in Detroit.

“We want to play well, we want to take points when we can in the eastern conference and win games on the road,” Horvat said. “We’ve got lots of confidence going on the road right now and to keep it rolling is going to be huge for us.”